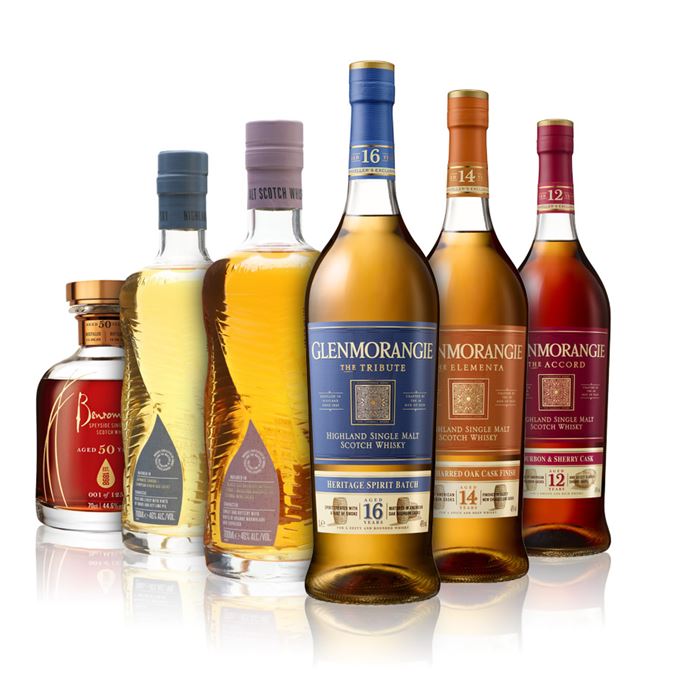 Dave Broom opts for the unconventional this week, as a smoky Glenmorangie rubs shoulders with Cù Bòcan’s new limited editions and a rare venerable Benromach.

First up, the 50-year-old Benromach (1969 vintage) impresses with tropical fruit on the nose and light, dusty smoke on the palate. Although, ‘after 50 years, things are inevitably becoming a little more fragile’.

Next, the first of a duo of new experimentaal Cù Bòcans has been aged in stout and Moscatel casks. It’s an strange combination pulled off, rated ‘well worth seeking out’ by Broom.

The second, matured in Japanese shochu and virgin oak, is all texture rather than taste, another radical experiment that ends up an exercise in restraint. Recommended once again.

Glenmorangie’s series of new travel retail exclusives begins with the Accord, a fruit bomb with ‘enough structure to stop any flabbiness creeping in’. Sweet, thick and sticky.

The Elementa leaves the viscosity behind in favour of passionfruit and Jaffa cakes. ‘Understated compared to Accord,’ says Broom. ‘It’s ’morangie in quiet guise.’

Finally, the Tribute is a peated, smoky Glenmorangie designed to evoke the distillery’s Highland peat-fuelled past. ‘It has the effect of a comfortable old woollen jumper’, says Broom, but ultimately becomes one for the ginger ale.

This week’s playlist becomes quite light and bouncy in time, moving away from the slower stylings of Television to post-punk Swell Maps and a lively cover from Karen Dalton. Hit the links in ‘Right Place, Right Time’ for more.

Batch 221 27/09/2019 From Imperial to Littlemill, Dave Broom loses himself in old drams from indie bottlers.
View All
Scroll To Top