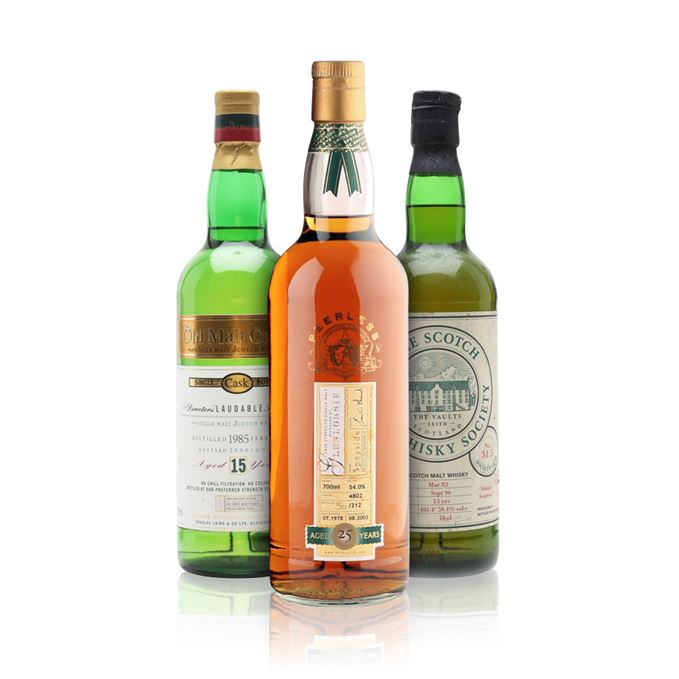 A mixed bag of malts forms this week’s rare whisky tasting, with Angus MacRaild selecting a trio of obscure curiosities that broadly sit within the traditional definitions of three of Scotland’s classic whisky regions.

First up is a 1978 Glenlossie, bottled in 2003 at 25 years of age by Duncan Taylor. There’s much that MacRaild finds to commend about this dram, even if it does feel a little inconsistent and ‘patchy’ at times. A solid example of how Speyside whisky was supposed to taste 20 or so years ago.

Following on from that is a rather idiosyncratic and charismatic young Jura. Distilled in 1983 and bottled at 13 years old by the Scotch Malt Whisky Society (SMWS), this is a funky, austere, coastal and strange wee Island dram – one that might not tick all the boxes technically, but is never short of entertaining.

Finally for this session is a 1985 Laphroaig, bottled at 15 years of age by Douglas Laing for the independent bottler’s Old Malt Cask range in 2000. While MacRaild finds this one sitting comfortably in the ‘southern Islay’ category, it still displays some charmingly subtle and lighter qualities.

These mark it out as an interim example of Laphroaig from a period when the distillery character was transitioning away from over fruitiness and more towards peat smoke and seashore characteristics.

Rare Batch 75 09/10/2019 A Karuizawa triptych illustrates the enduring excellence of this cult Japanese single malt.
View All
Scroll To Top