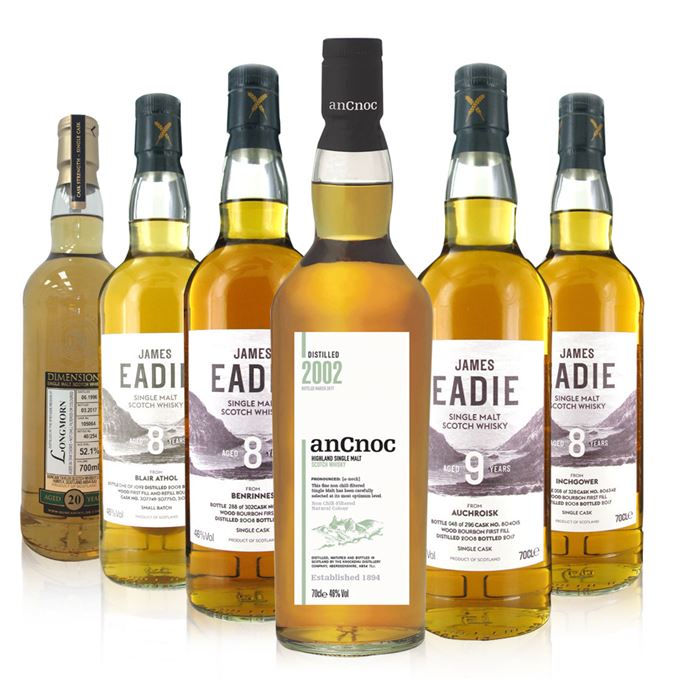 There’s a fine line between delicacy and maturity, which is skilfully handled by this week’s first new whisky – anCnoc 2002. Setting an accidental ‘dusty’ theme, the whisky has ‘excellent texture’ and notes of lemon, orange and sultana, says Dave Broom.

Following on from this comes the first of four new James Eadie bottlings for Royal Mile Whiskies, a nine-year-old Auchroisk, which is recommended as a delicious aperitif dram.

A second James Eadie bottling next, in the form of an eight-year-old Benrinnes, which like the anCnoc has a certain dustiness on the nose – neither of which should be taken as a bad thing, stresses Broom.

And onto the fourth, and final, James Eadie expression this week, an eight-year-old Inchgower, with pops of sweetness and spices.

Then to complete this week’s line-up, a 20-year-old Longmorn from independent bottler Duncan Taylor that’d be good to sip while reading Roald Dahl’s James and the Giant Peach.

Batch 95 12/05/2017 Island malts from Arran, Jura and Ledaig, plus three grains: Cambus, Invergordon and Strathclyde.
View All
Scroll To Top