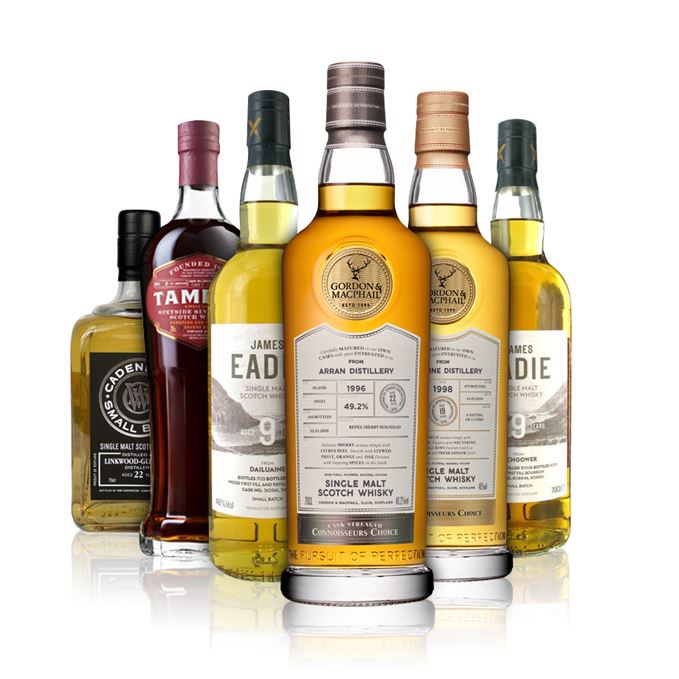 The sole interloper is a mid-1990s Arran bottled by Gordon & MacPhail (G&M), but Broom struggles to detect much of the island distillery’s character beneath the heavy influence of a rather assertive refill Sherry hogshead.

Then we arrive in Speyside with a pair of lesser-spotted Dailuaines – one from G&M and the other a younger example bottled by James Eadie. Both have their undoubted merits, from the enigmatic pleasures of the former to the heavier, drier character of the latter.

We stay on the richer side of the Speyside spectrum with another James Eadie bottling, this time from Inchgower. Again, the cask has plenty to say here, but there’s also lots of juicy fruit and the result, says Broom, is as comfy as a pair of old slippers.

Step forward Cadenhead next, and the highlight of this week’s batch: a 22-year-old Linkwood that brings complexity and a sense of mystery, and demands time, patience and contemplation. ‘Gorgeous,’ enthuses Broom.

We close with more of a whimper than a bang, sadly, with a single cask Tamdhu selected by the team at the Speyside distillery. It’s full-on, heady and raisined – but, for Broom, the wood has ‘flogged the energy out of the spirit’.

It does at least provide an excuse to play a little Black Sabbath – one of six tracks on a Spotify playlist chosen by Broom to accompany these whiskies. Click on the links in ‘Right Place, Right Time’ to find out more.

Campbeltown Malts Festival 2018 11/06/2018 Delayed, but worth the wait, as Becky Paskin reviews Campbeltown’s festival editions.
View All
Scroll To Top