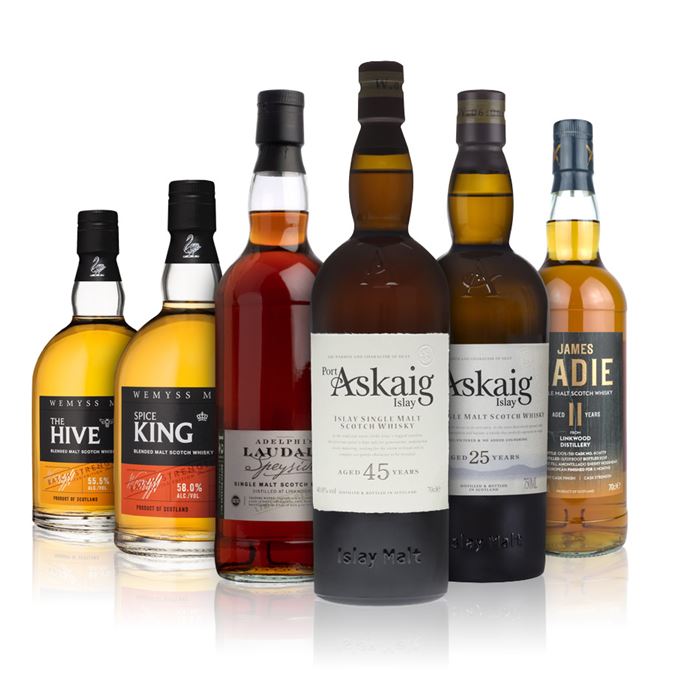 First up is The Hive from Wemyss Malts, for its Batch Strength series. With notes of honey, grass, tangerine and flowers sitting alongside a higher-strength abv, this is a whisky ‘buzzing’ with freshness.

A pair of Linkwood whiskies begins with an 11-year-old with an Amontillado finish from indie bottler James Eadie. The distillery character is there, but not without some ‘explosive’ Sherried notes interrupting things.

Adelphi returns again this week, with a 12-year-old Linkwood bottling. An odd opening of baked beans gradually flows into cedar wood and dark, rich fruits, but these aren’t enough to stop the whisky flopping towards the finish.

Two Port Askaig single malts from Elixir Distillers follow. The first, a 25-year-old, shifts from coastal notes of seaweed and bog myrtle to the meatier elements found on terra firma.

The second Port Askaig whisky is a 45-year-old single malt that was matured in a combination of five Sherry butts, before being married in the year before it was bottled. What the whisky lacks in muscle from its low abv, it more than makes up for in delicacy and balance.

Having opened this week’s reviews, Wemyss also brings them to a close with its Spice King, a blended malt that reaches rich depths with notes of sultanas, sponge cake and sweet dried fruits. ‘Well worth a look,’ says Broom.

Mark Olson, Jake Xerxes Fussell, Arve Henriksen, and Blue Rose Code bring a sunny and mellow mixture of tracks to this week’s playlist, while Paul Bley and Ornette Coleman add a jazzy flourish at the end – all found in Right Time, Right Place.