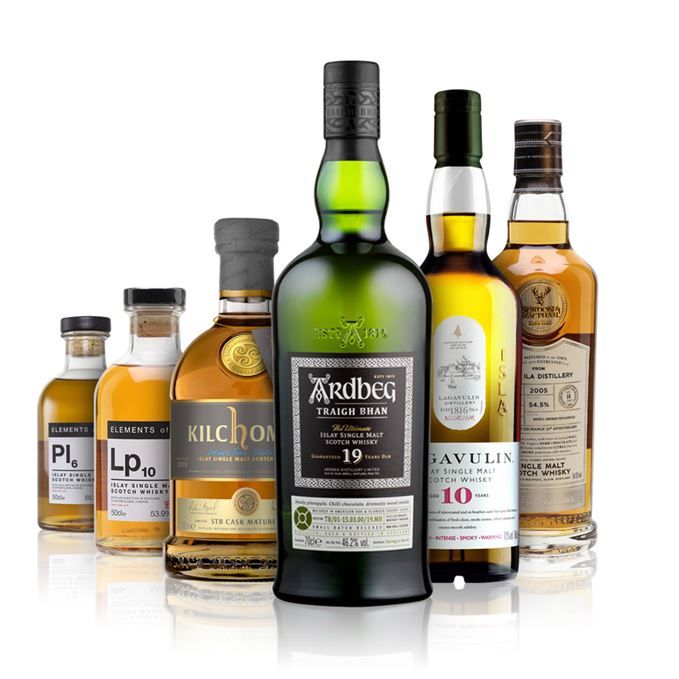 Dave Broom returns to Islay to sample some of its latest offerings, taking in Caol Ila, Lagavulin, Kilchoman and Ardbeg’s familiar funk, capping off with the discovery of a duo of new Elements.

Broom moves on to Caol Ila for an ‘easy-going’ 14-year-old bottled by G&M for The Whisky Exchange. He finds sweetness and coastal qualities hiding an ‘aspirin-like minerality’ and a menthol finish.

Things become more robust with a Kilchoman matured in shaved, toasted and recharred red wine casks. The seven-year-old is ‘bold and multifaceted’, commanding the highest score of the bunch.

The travel retail-exclusive Lagavulin 10 fails to impress with its catch-all approach. ‘By trying to widen Lagavulin’s remit,’ Broom reckons, ‘you’ve ended up with the equivalent of Radiohead turning into Take That.’

The first of a pair of bottlings from Elements of Islay, Lp10 is rated ‘a decent and approachable example’ of Laphroaig, but Broom concludes water strips it of its vitality.

Finally, the Pl6 – a Port Charlotte distilled in 2011 – is said to be full of ‘tangerine marmalade and juicy fruits’ on the palate and a ‘lightly fatty’ quality on the nose. However, it’s another one best kept neat.

This week’s playlist mashes up Suicide, the Jayhawks, Link Wray and even, er... Iggy Pop singing Edith Piaf in French. Click on the links in ‘Right Place, Right Time’ to hear more.