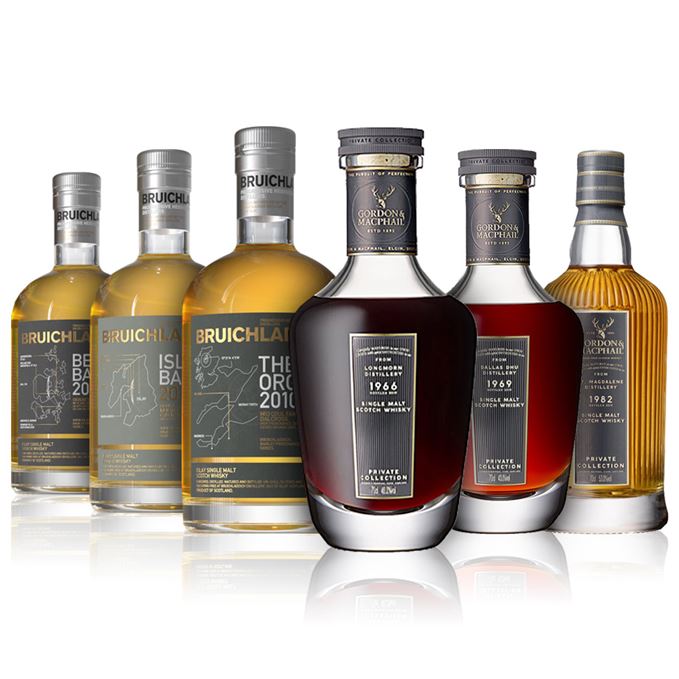 Dave Broom finds this week’s whisky reviews split into two very different camps – while Bruichladdich looks into one of whisky’s possible futures with its Barley Exploration series, Gordon & MacPhail celebrates the past with its unrivalled archive of aged whiskies.

First up is an eight-year-old Bruichladdich made using rare bere barley, a strain with a ‘desperately low yield’. It’s full of fresh cereal notes with sugared porridge and climber’s chalk. ‘Bere’, concludes Broom, ‘continues to be a revelation’.

Next, a six-year-old malt distilled entirely from barley grown on Islay shows promise for a young whisky. ‘Already showing great concentration and balance,’ Broom finds, admiring the difference in distillery character achieved with the grains.

Bruichladdich’s final bottling, a seven-year-old made with organic barley, smacks of ‘light fruit and syrup that drifts into elderflower cordial’. It’s fresh, soft and vibrant – all reasons for the distillery to continue playing mad scientist.

From Gordon & MacPhail’s formidable back catalogue comes a 50-year-old Dallas Dhu. ‘A rare beast indeed,’ says Broom, ‘and one which has held up remarkably well’. A bottle, however, will cost £6,950.

Things skew even older, with a 53-year-old Longmorn providing ‘big, bold and heavily Sherried’ notes and ‘a concentrated quality akin to Marmite’. Love it or hate it, you’ll be lucky to snap one up, as less than 400 bottles exist.

Finally, the 37-year-old St Magdalene is believed to be the ‘oldest ever’ released from the distillery. Even after all these years, Broom finds it ‘balanced, refined and untroubled by oak’ and therefore filled with a sense of liberation.

The playlist moves from the Fourth World music of Jon Hassell to the chill realm of Schubert’s Winterreise, finishing with a burst of optimism courtesy of Lorraine Hunt Lieberson.