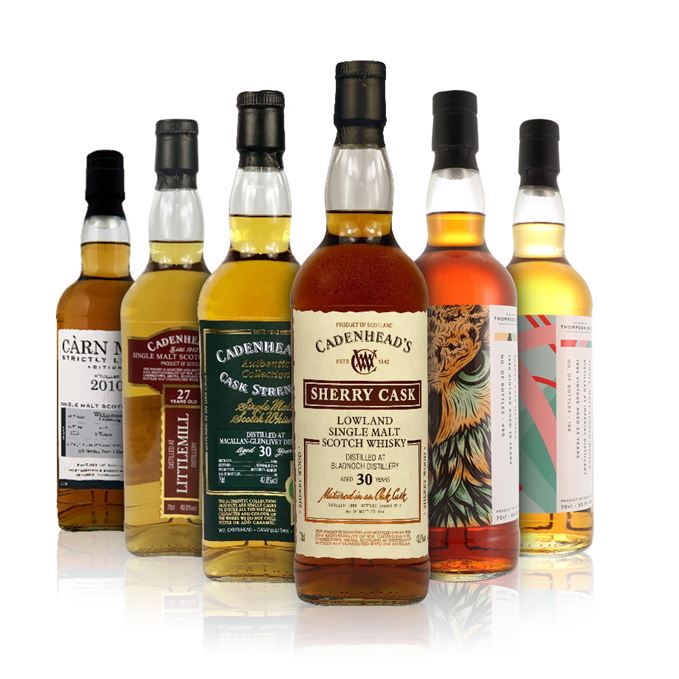 Dave Broom loses himself in some old drams with the help of another selection of indie bottlers, experiencing the highs, lows and surprises that life – and off-the-beaten-track whisky – often bring.

First to a 30-year-old Bladnoch bottled by Cadenhead that debuts as the batch’s highest scorer with dried, fruity overtones that proves just shy of bring an overt Sherry bomb.

From dried dark fruits to fresh orchard ones, Broom moves to a surprisingly youthful-feeling 24-year-old from closed distillery Imperial. It’s ‘a caress on the tongue’ ‘becoming fattier and creamier over time. One to dwell on.

Next up is a 27-year-old from the second closed distillery of the batch, Littlemill, and another expression bottled by Cadenhead. Full of mango and guava notes backed by oil and leather on the palate, it’s a classic Littlemill in the sense that you’re never quite sure what’s next.

From the Lowlands, Broom moves to Speyside with a Glenlivet that’s been wizened by its 30 years in oak. ‘You get the sense that it’s always been a quiet performer,’ says Broom, ‘only now getting its big chance.’

A 38-year-old blended whisky from Thompson Bros. is on its last gasp, with a greenish tint, a distant nose and a melancholy ending. Farewell.

Never one to end on a low note, Broom returns to last week’s glut of Càrn Mòrs for the final whisky, a Laphroaig named after former distillery owner and manager Bessie Williamson. Its ‘excellent balance’ clears all away.

This week’s soundtrack rambles through Sandy Denny, Brighde Chaimbeul and Lankum’s radical reworking of Wild Rover, plus a diversion into the desert with Giant Sand. Hit the links in ‘Right Place, Right Time’ for more.