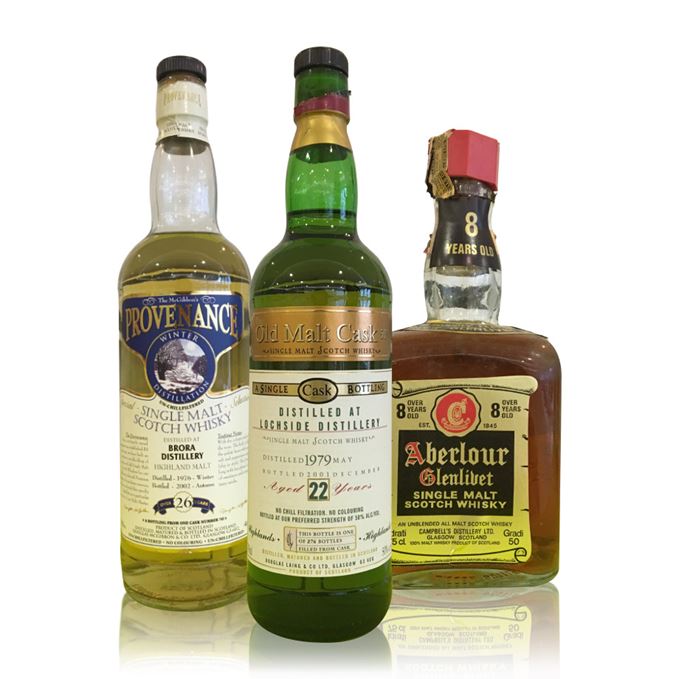 Our latest selection of rare whiskies summoned up from the vaults takes us back in time to the 1960s and 1970s which, in retrospect, looks like whisky’s age of innocence. Here we find two long-shuttered distilleries and an early example of a Speysider that remains hugely popular to this day.

That’s where we start, with an eight-year-old Aberlour bottled for Rinaldi and the Italian market. With its distinctive square bottle and scroll-like label (‘unblended all malt Scotch whisky’), it’s very much a creature of its time.

What time? Well, this was bottled in the early 1970s, dating its distillate to the mid-1960s. It’s high-strength (50% abv), but the ensuing 50 years haven’t been entirely kind to the liquid, giving a funky, almost-off quality that chief engineer Dave Broom nonetheless finds interesting.

Beyond Port Ellen, Brora is perhaps the most celebrated of lost distilleries (and, like its Islay colleague, it’s set to be revived in the next few years). Part of the Highland distillery’s charm, says Broom, is that you’re never quite sure what version of Brora you’re going to get (distillation regimes varied quite widely in its latter years).

Sadly, there’s no chance of reviving Lochside. The versatile plant, with its German brauhaus-inspired white tower looming over Montrose, was demolished in 2005 after being sold to developers several years earlier.

The 22-year-old example tasted by Broom gives a tantalising glimpse of what was, and what might have been, had Lochside been spared the axe. It may be a little late, but this Highland distillery is finally beginning to gain the renown it merits.