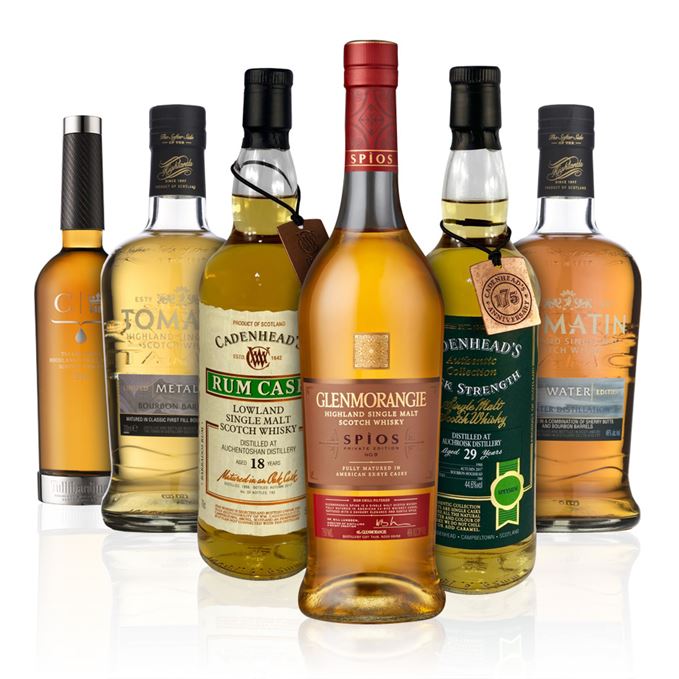 The Highlands dominate this week’s new whisky reviews, with examples from Glenmorangie, Tomatin and Tullibardine demonstrating the art of maturation and wood’s role in the creation of flavour.

But first to the Lowlands, where a rum-finished 18-year-old from Auchentoshan (courtesy of independent bottler William Cadenhead) has all the makings of a great whisky, if it weren’t for a metallic, blood-like element.

Next, a fat, sweet and floral Auchroisk, also from Cadenhead’s, sweeps us up the country further into Speyside. Perhaps not the finest example of this little-seen distillery, but Dave Broom is still envisaging its involvement in a before-dinner treat.

The annual Glenmorangie Private Editions are always an anticipated release and this year’s was no exception. Known for not always being a fan of Scotch matured in ex-rye casks, Broom is impressed by the layered flavours of fruit and spice in Glenmorangie Spìos – a ‘clever’ dram, he says.

The final two expressions in Tomatin’s Five Virtues series follow – Metal, which tastes anything but metallic, and Water, a boisterous, Sherried drop which again couldn’t be further from the watery, diluted whisky its name suggests.

Finally to Tullibardine, where the effect of maturation in (possibly several) refill casks over an extended period is fully demonstrated in the Perthshire distillery’s 1962 vintage. At 52 years old you’d expect the wood to dominate, but not so here, says Broom, where a subtle, waxy maturity plays a supporting role to the lingeringly fragrant and floral distillery character. As graceful as a ballerina, he remarks.

Batch 132 26/01/2018 Three Irish whiskeys this week, plus the return of Crabbie’s to Scotch and an Islay single malt.
View All
Scroll To Top