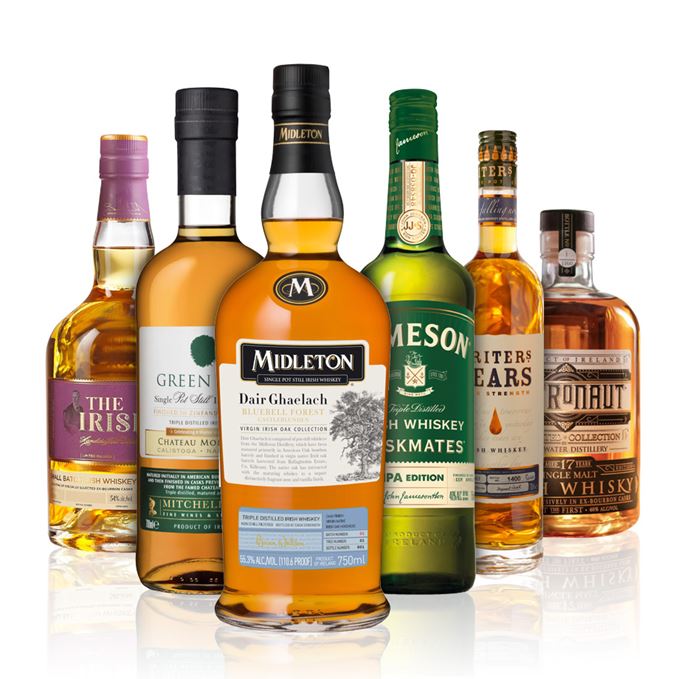 As we near St Patrick’s Day (on 17 March), it’s time for another Irish whiskey special, rounding up a batch of recent releases. And, from innovative finishes to cask strength spin-offs, Dave Broom has a number of treats in store.

Cork meets California in our first whiskey, as classic single pot still Green Spot is given a spell in ex-Zinfandel casks sourced from famed Napa Valley winery Chateau Montelena. It’s definitely one for those who like their whiskey on the soft and sweet side.

This batch also includes the 2017 releases of two cask strength examples from Walsh Whiskey, spin-offs from the company’s core brands: The Irishman and Writer’s Tears. Both are vattings of single malt and single pot still, and both offer good, reliable drams – with Writer’s Tears the more restrained of the two.

We’re back at the Midleton distillery for two more whiskeys this week, including an IPA cask finish from the giant of Irish whiskey, Jameson. Part of the Jameson Caskmates initiative, it’s a creditable effort, although not Broom’s favourite IPA finish.

He’s much more impressed by Midleton’s latest Dair Ghaelach expression, Bluebell Forest, which goes so far as to specify exactly which tree (number five, if you’re interested) was used to make the Irish oak cask in which it was finished. Beyond the back-story, it’s a single pot still whiskey of substance and balance.

Lastly, there’s a whisky from one of the many new distillery ventures currently popping up all over the Emerald Isle. Retronaut is a 17-year-old single malt, bottled by the Blackwater Distillery while it waits for its own new make to mature. Broom resorts to sporting cliché – it’s ‘a game of two halves’, he says – but he finds its quiet freshness highly appealing.

Batch 134 09/02/2018 A dark and richly flavoured theme, with Benrinnes, Mortlach, Dailuaine, Highland Park and The E&K.
View All
Scroll To Top