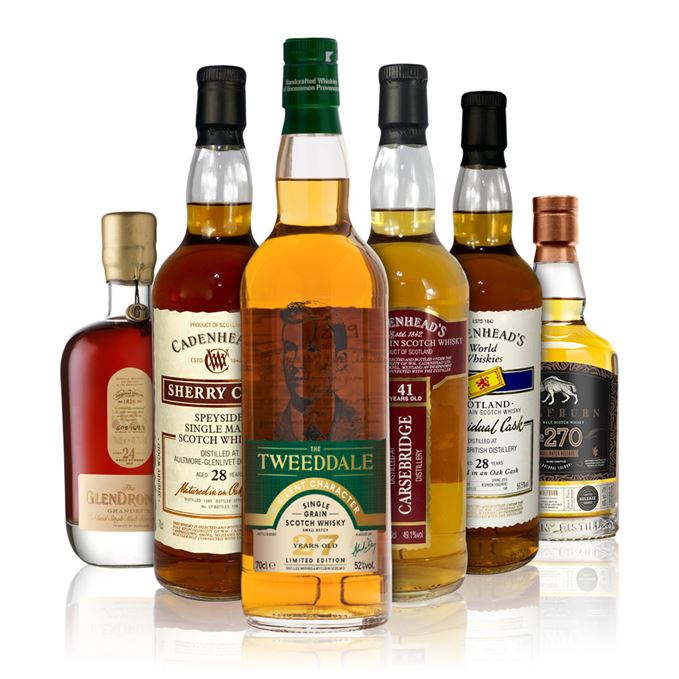 A neat split between single malts and single grains this week, with three of each, including liquid from two closed distilleries (Carsebridge and Cambus, the latter the source of The Tweeddale A Silent Character).

There’s also a hefty dollop of aged whisky here. If we strip out the Wolfburn (NAS, but youthful), the youngest – but most expensive – dram here is GlenDronach’s 24-year-old Grandeur, a mighty Sherry bomb that reminds Dave Broom of a funky pair of trousers.

Moving up in age, we have that Cambus single grain from R&B Distillers’ The Tweeddale label. ‘A Silent Character’ is 27 years old and impresses Broom with its ‘softly decadent’ nature.

Independent bottler Wm Cadenhead provides two 28-year-old whiskies this week, and both are well-received: an Aultmore single malt from a Sherry hogshead is praised for its oily, resinous texture, while a single grain sourced from North British wins Broom over with its ‘wise and relaxed’ character.

Cadenhead is also the source for the oldest whisky on show here, a 41-year-old single grain from the ‘lost’ distillery of Carsebridge. Complex and ‘slightly enigmatic’, it’s said to be worth a look.

We close with that altogether more youthful Wolfburn release, but this is no anti-climax: another seriously impressive whisky from the far north beguiles Broom with its floral fragrance. ‘Real class,’ he enthuses.