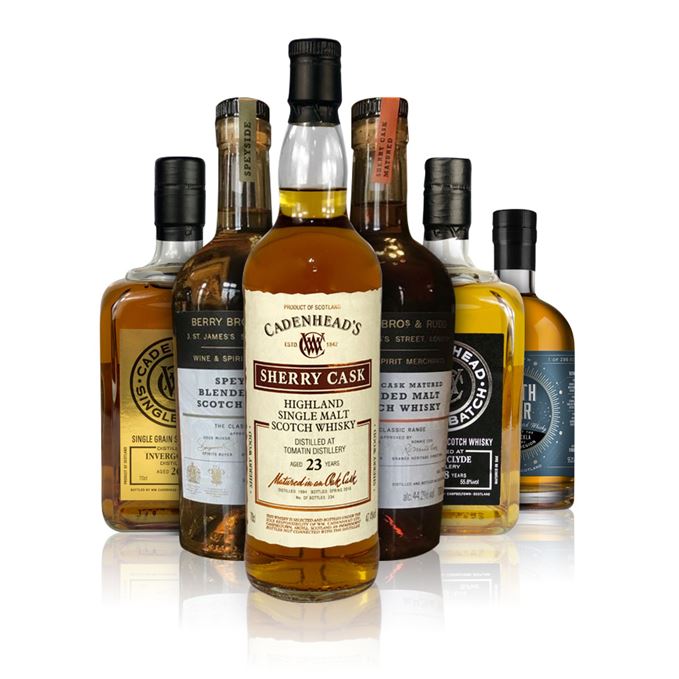 This week, Dave Broom tastes his way through a mixed bag of new Scotch whisky releases, including two single malts, two single grains and a pair of blended malts that form part of Berry Bros & Rudd’s new Classic Range (tasting notes on the remaining two whiskies will follow next week).

Both grains come courtesy of independent bottler Wm Cadenhead, kicking off with a mature Invergordon that displays some distinctly atypical characteristics. ‘It walks its own path, only occasionally giving a nod to the conventional,’ says Broom, ‘which is something you have to admire.’

The second grain hails from Strathclyde, and is another mature example, evoking queenly comparisons and the delicious prospect of hazelnut sprinkles on honeycomb ice cream. ‘Old, but still well-balanced,’ says Broom.

In between the two grains, Broom samples an altogether more youthful single malt from Royal Brackla, bottled by North Star Spirits, and is entranced by its floral scents and racy acidity.

Then he moves on to the first of the Berry Bros blended malts, a Sherry cask-matured example that has him purring about its power, elegance and crazily low price. The second example, which combines Speyside malts, showcases the lighter side of the region and should, advises Broom, be ‘everyone’s summer aperitif whisky’.

We close proceedings with our second single malt, a 23-year-old Tomatin bottled by Cadenhead. While not without its merits, it’s a ‘mature and cantankerous geezer’ that, like all the whiskies featured this week, is accompanied by some suitable music. Click on the links in ‘Right Place, Right Time’ to find out more.

Batch 146 04/05/2018 Four Islay whiskies, including Ardbeg and Bunnahabhain, plus Glenlivet and Aultmore from the SMWS.