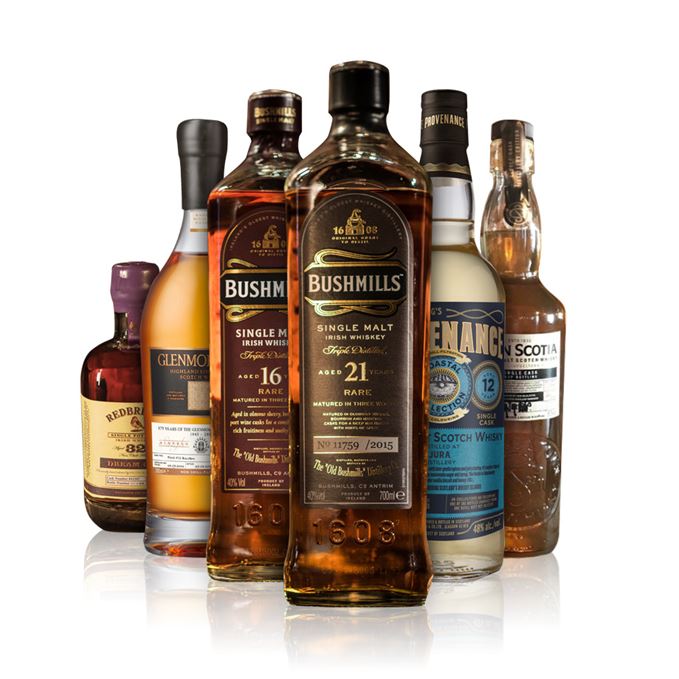 Diversity is the name of the tasting game for Dave Broom this week, as he takes us on a sensory tour of Ireland and Scotland, including five single malts and one single pot still whiskey.

We start north of the Irish border, close to the Antrim coast at Bushmills, with a pair of single malts aged for 16 and 21 years respectively. Broom finds them both delicious, although he has slight reservations over the pricing of the 16-year-old.

Glenmorangie’s latest release is hardly cheap either (£650 for a 16-year-old single cask single malt), but Broom is happy enough to praise its ‘heady, hedonistic’ charms. And, after all, it’s not every day that you celebrate your 175th birthday.

From Tain in the eastern Highlands, we trek all the way west to Campbeltown, and a medium-peated Glen Scotia that’s theoretically only available from the distillery shop. It’s a belter of a dram for £75 – or you could visit a certain online retailer and pay more than twice that sum. Your choice.

Let’s move swiftly on and head further west to Jura for the second release in Douglas Laing’s Provenance Coastal Collection. This 12-year-old single malt may showcase the distillery’s tendency towards rigidity, but it’s nonetheless a ‘fun’ glass, says Broom.

Back to Ireland to close, and another remarkable whisky from Irish Distillers’ Redbreast range. This 32-year-old has been bottled from master blender Billy Leighton’s favourite cask and, if it also seems slightly expensive at €500 for a 50cl bottle – well, what value do you place on dreams?

Five whiskies scoring 85 points or more, and three in the 90s. As Dave Broom says: ‘What a week!’

Batch 155 06/07/2018 A bevy of Bunnahabhains, including a resurrected bottler and a fascinating maturation project.