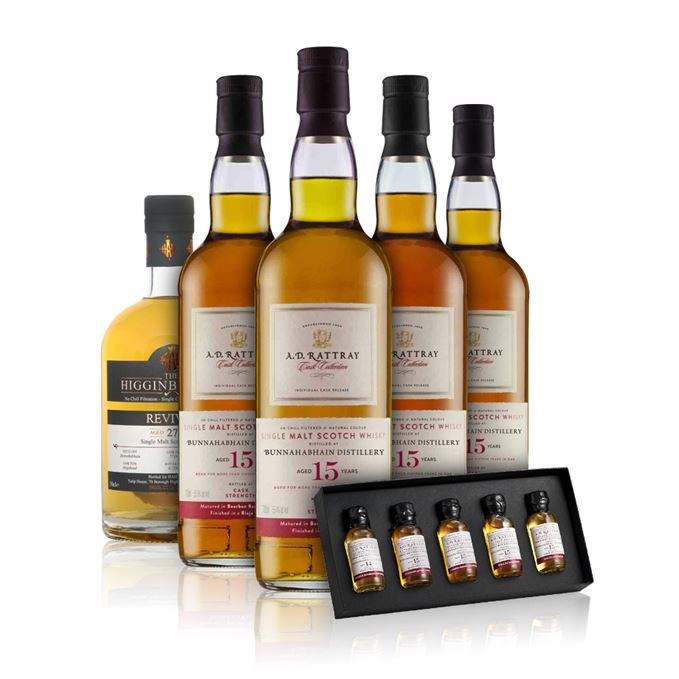 It’s a Bunnahabhain bonanza this week as Dave Broom turns his gaze on six independently bottled single malts from the Islay distillery, including five from a fascinating maturation project using a range of smaller octave casks.

But we start with the oldest Bunna’ of the week, a 27-year-old distilled in 1989 and bottled under the resurrected Higginbottom or HAH name, recalling Victorian whisky maker Henry Albert Higginbottom. ‘A delicious glass,’ says Broom.

Now for the octaves. Bottler AD Rattray took a 14-year-old Bunnahabhain ex-Bourbon hogshead, and split it into five parts, keeping one as a control sample and finishing the other four for five months in 50-litre octaves (a similar exercise was undertaken with whisky from Pulteney and Arran).

The four octaves were specially commissioned from coopers, and were made using staves from larger casks that previously held oloroso Sherry, PX Sherry, Rioja wine and rum. The aim was to see what would happen as a result of a short burst of amplified interaction between wood and whisky.

All four, plus the 14-year-old control sample, are sold in an Octave Project Little Dram Set (5 x 30ml miniatures), while the four octave-finished whiskies are also on sale as 70cl bottles – all available from AD Rattray’s website.

It’s a ‘fascinating exercise and should be applauded’, says Broom, reserving particular praise for the Sherry finishes and the original Bourbon cask sample.

The laid-back flow of these six unpeated Bunnas is reflected in the Spotify soundtrack for the week, led by Gene Clark and featuring the accomplished support of Dennis Wilson, JD Souther and Lyle Lovett. Click on the links in ‘Right Place, Right Time’ to access the playlist.

Batch 154 29/06/2018 Bushmills and Redbreast from Ireland, plus Glenmorangie, Glen Scotia and Jura from Scotland.
View All
Scroll To Top