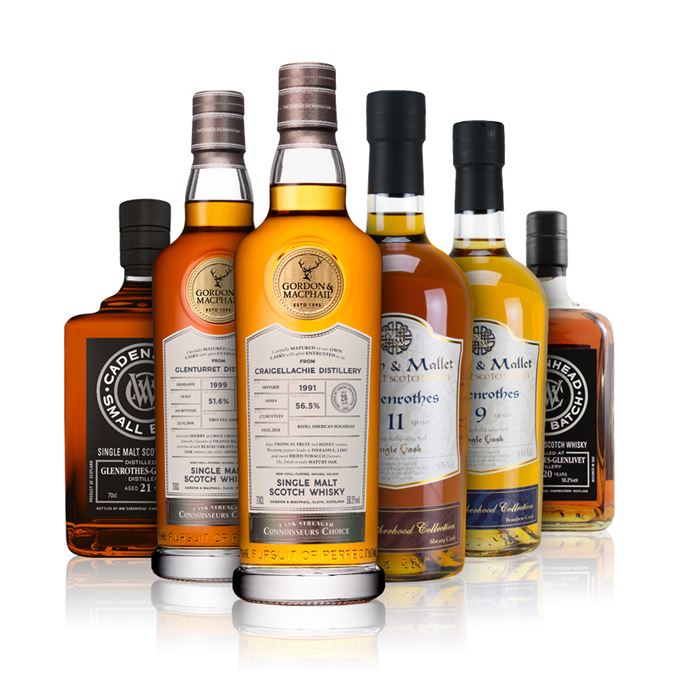 It’s another sojourn through Speyside this week with a rogue Highlander thrown in, as Dave Broom embraces a gaggle of Glenrothes (Glenrothii?) bookended by Craigellachie and Glenturret.

First to Craigellachie and a G&M bottling of a 1991 vintage which at 56.5% abv delivers a ‘fairly poky nose prickle’, and renders the potentially floral and waxy elements indistinguishable.

Venturing now down the A941 to Rothes, where a quad of Glenrothes at various stages of maturation piques Broom’s interest. He’s starting to enjoy exploring a distillery’s character at varying ages (see last week’s Caol Ila extravaganza).

First up a nine-year-old bottled by Valinch & Mallet, which with its malty cereal, condensed milk and dried orchard fruit qualities makes Broom sit up immediately. ‘Very impressive for a young ‘un,’ he says.

Following closely is an 11-year-old, again by V&M, which shows the strong impact two additional years in an active cask can have on a whisky. Waxy, Sherried and chocolatey, it’s a hit, in more ways than one.

Indie bottler Cadenhead steps up to the plate next, with 20- and 21-year-old bottlings, distilled in 1997 and 1996 respectively. Is there much difference between the two? A fair amount, as it transpires. If the younger of the pair shows promising dark berry fruits, if not a little too much restraint, the elder is awash with flavour on the palate. ‘An utterly delicious mature Rothes,’ Broom summates.

Finally he leaves Speyside and heads south to Glenturret, where a ‘strange’ G&M bottling is more reminiscent of chicken stock and mince. Still, the heaviness is somewhat appealing…

Batch 160 10/08/2018 A concatenation of Caol Ilas with a couple of neighbours thrown in for good measure.
View All
Scroll To Top