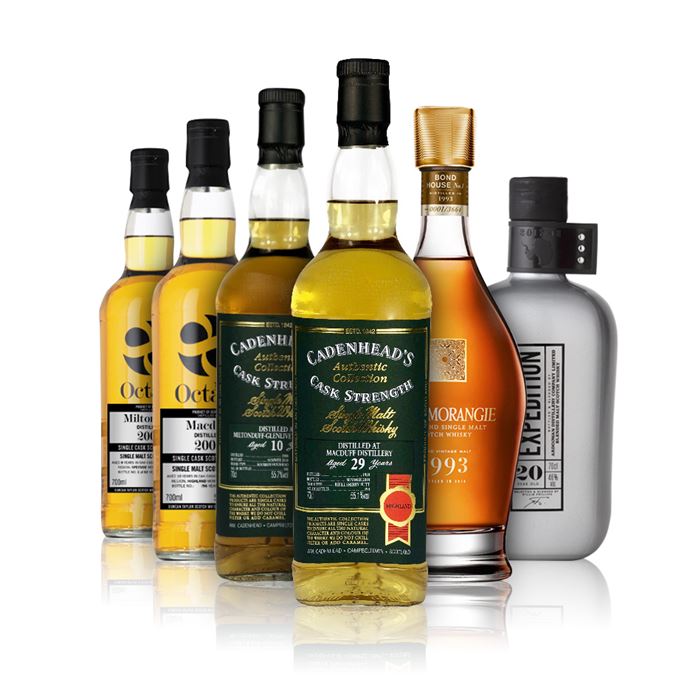 Leading the charge is yet-to-be-built Ardgowan distillery with its first release Expedition, the blended malt containing traces of liquid that’s travelled to the South Pole and back. Worth the trek? ‘A worthwhile and relaxing dram,’ says Dave Broom – ideal for putting your feet up after a long walk.

It’s followed by Glenmorangie’s Grand Vintage 1993, which proves to be as full-bodied and fruity as you might expect after 15 years of secondary maturation in ex-Bual Madeira casks.

Then comes the comparative Miltonduffs, with a ‘slippery, slithery’ 10-year-old from Cadenhead that’s hiding something from Broom he can’t quite pinpoint.

On to the Macduffs, with the Duncan Taylor 10-year-old nursing a ‘weight and a glossiness’ thanks to the octave cask, which also masks some distillery character. However it’s soft, chocolaty and warming, says Broom.

The final bottle in this week’s batch is a 29-year-old Macduff from Cadenhead, which is an exercise in unhurried, unconventional maturation. With a nose that blooms into Oolong and a long, lightly fruited finish, Broom finds the sense of time passing before his eyes, marking this Macduff as one to watch.

As usual, this week’s playlist complements the line-up below, veering from juicy, classic R&B to the icy cool tones of saxophonist Jan Garbarek.

Batch 166 14/09/2018 Getting to grips with GlenAllachie’s new core range, as well as two stunners from Asta Morris.
View All
Scroll To Top