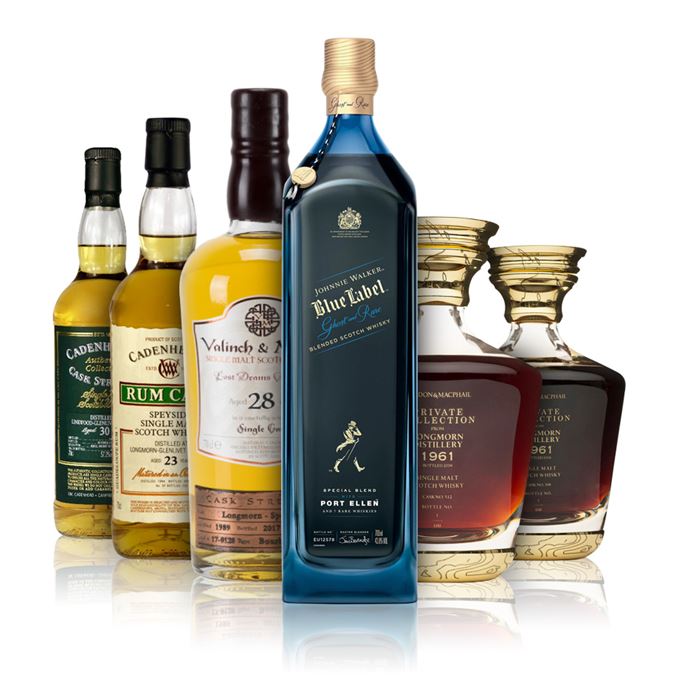 A quartet of old Longmorns is heralded this week by a limited edition Johnnie Walker and a 30-year-old Linkwood, as Dave Broom gets to grips with a batch that lands at the premium end of the pricing scale.

First up to bat is Johnnie Walker Blue Label, Ghost and Rare Port Ellen Edition. A mix of the eponymous Port Ellen and other single malts, plus grains from Carsebridge and Caledonian distilleries, Broom finds it’s a stellar example of a harmonising blend.

On to Cadenhead’s first bottling of the batch, a 30-year-old Linkwood distilled in 1987, and Broom finds a relaxed age straight away. It’s all lean and rangy, ‘like brushing desert dust off your trousers’, and still slightly hot considering it’s rich in years.

Broom then ventures into Longmorn territory, coming across a 23-year-old bottling (another Cadenhead) that is better on the palate than the nose, with ‘poached pear and a chewy texture’ rising to the fore. It’s spent between three and four years in Guadeloupean rum casks, and it shows itself with vegetal and pineapple notes.

Valinch and Mallet’s 28-year-old Longmorn doesn’t quite hit those heights, but still gives a good account of itself, with a ‘lovely and fuzzily warm’ nose that soon gives way to something more grown-up. ‘A lovely rich nose with classic Longmorn elements,’ says Broom, although the palate is dominated by parma violets.

A pair of lofty single cask Longmorns from 1961, bottled as part of Gordon & MacPhail’s Private Collection, finishes this round off. Cask #508 offers a rich, nutty nose and an extremely grippy palate overtaken by wood. Although water lifts latent flavours out of the whisky, in Broom’s words: ‘nothing can stop the relentless thrust of the tannins’.

Cask #512 fares similarly, with big fruitcake elements and a leathery scent giving way to a biting palate reminiscent of old tomato vines. Wood domination is to be expected after so long, but it’s not a style for everyone. ‘It’s a matter of choice’ Broom concludes.

The soundtrack is distinctly and appropriately fogey-ish this week, from a little old-fashioned blues from the Alabama Shakes to modern dad-rock courtesy of Jack White.