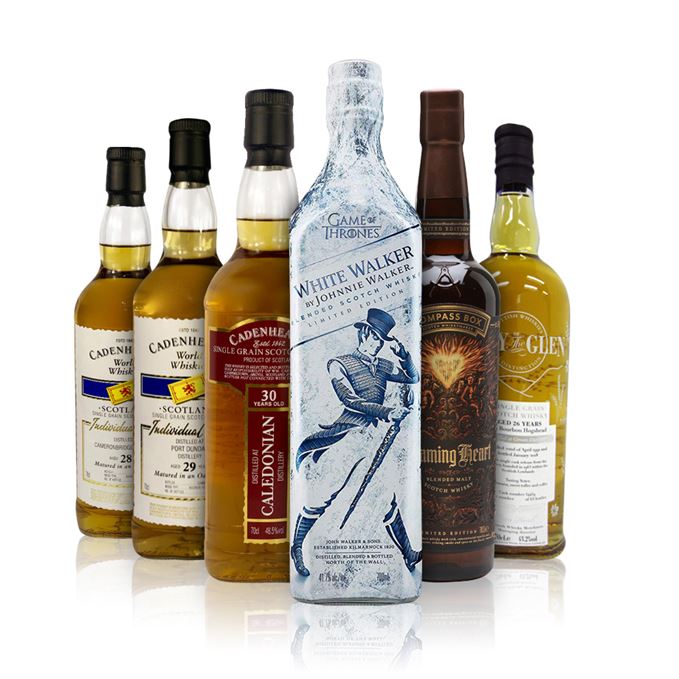 Dave Broom road tests a gaggle of grains this week, accompanied by two drams from opposite sides of the scale – one which celebrates the cold, the other the heat of the fire.

First up is a Caledonian, the first of three Cadenhead single grain bottlings. With lots of bananas and milk chocolate on the nose, Broom finds it delicious, even if the palate doesn’t quite match the nose’s body.

Moving away from single grain, Compass Box Flaming Heart’s 2018 edition is big, bold and sweet. It’s a rich, punchy blended malt with ‘big toffee and smoke’ notes all the way through the palate, with a little peat fire to ensure it lives up to its name.

Independent bottler Lady of the Glen shows up to present its 1991 single cask Girvan offering. It’s a light, spirity grain whisky with a ‘floral edge’, but it’s dry enough to leave Broom scratching his head. ‘Why not just keep it in a cask for longer?’ he muses.

Completing the song of ice and fire started by Flaming Heart, Johnnie Walker’s White Walker gets two tasting notes: one at room temperature and one from the freezer, which is the whisky’s recommended serve. Broom actually prefers it ice cold, but concludes the experiment’s probably been done to a strict brief.

It’s another old single grain to finish off, as Broom grapples with a ‘chunky’ Port Dundas that’s all roasted corn and maple syrup. He decides it’s worth seeking out, and even takes the time to provide a pronunciation lesson should you want to order your own.

This week’s playlist veers from the haunting folk of Bon Iver to the unlikely duo of Yoko Ono and the Pet Shop Boys. Chalk and cheese? More like fire and ice.

Batch 170 12/10/2018 Starting with Ardbeg Twenty Something, Dave Broom gets immersed in Scotland’s island whiskies.
View All
Scroll To Top