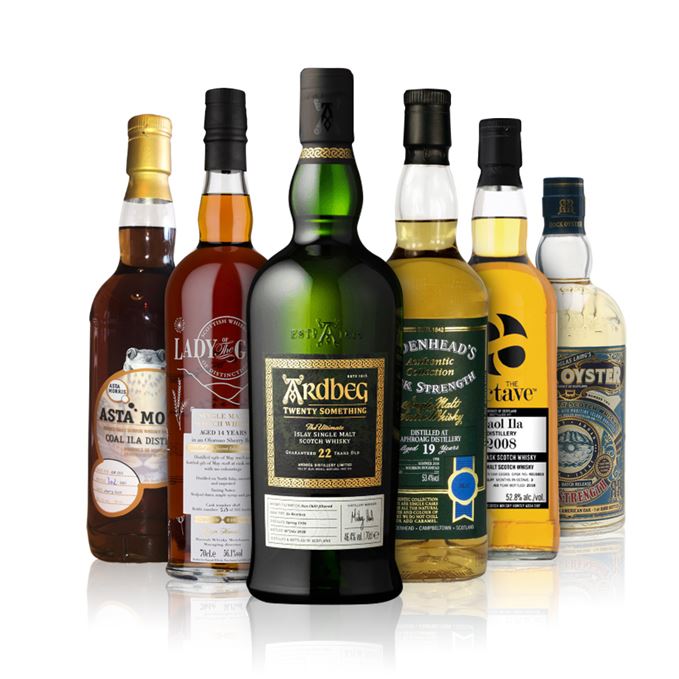 Five Islays and an island blended malt make up this week’s whisky reviews, as Dave Broom immerses himself in Scotland’s smoky outlying regions.

First up is Ardbeg Twenty Something, the latest in Ardbeg’s famous committee-only bottlings, which is designed to honour the men and women who kept the distillery afloat during darker times. Open and gentle, it’s all smoked cheese and scallops – not quite the beast you might imagine, according to Broom.

Asta Morris returns with another excellent young whisky at an absolute steal. With a big walnut whip nose and a thick, treacle palate, Broom proclaims this Caol Ila ‘another must-buy’ from the indie bottler.

Another young Caol Ila, this time from Duncan Taylor’s Octave range. Broom proclaims this 2008 vintage ‘good and expressive’ with chocolate Hobnobs on the nose and a touch of roast crab on the finish – not the most common of combos, but it works for Broom here.

The only non-single malt on today’s roster, the second batch of Douglas Laing’s Rock Oyster Cask Strength is a reasonably priced blended malt that Broom advocates as a shot, as it’s all heat, seaweed and citrus. Incredibly maritime with sweetness, salt and smoke, which some will undoubtedly love.

Finally, we come to a mystery independent bottling from Lady of the Glen, a Secret Islay. At cask strength, it’s oily, chewy and bittersweet, although Broom enjoys the balance (and surprising lack of heat, given its 56.1% abv).

Appropriately, the playlist zips across the ocean this week. Starting with Scottish post-rock heroes Mogwai, head across the pond for American new wave the B-52s’ classic Rock Lobster and over to Mississippi John Hurt for the sound of the Bayou.

Batch 169 05/10/2018 This week’s reviews include Balvenie DoubleWood 25, Aerstone and GlenDronach 15 Revival.
View All
Scroll To Top