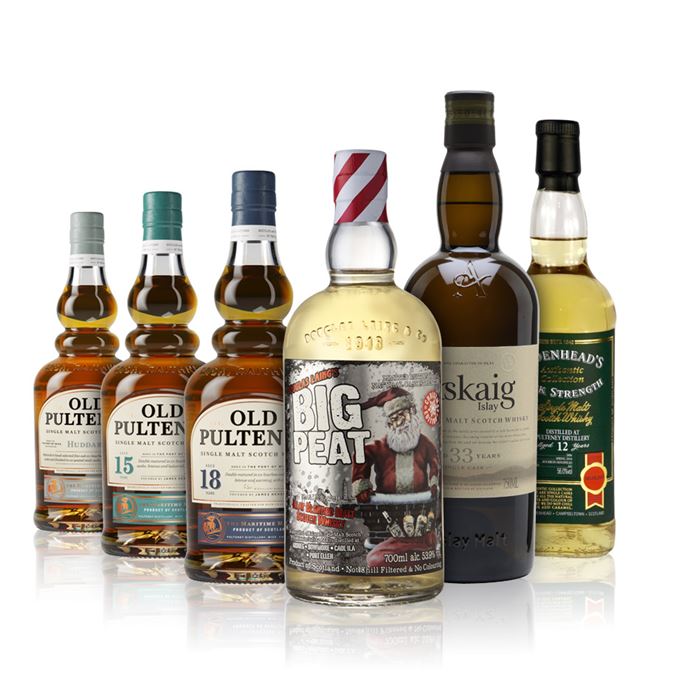 It’s curtains for 2018, but Dave Broom remains adrift in a sea of whisky. Two Islays, a festive bottling and a US exclusive bookend four Old Pulteneys while the playlist remains as unpredictable as the open ocean.

Next is the first of Old Pulteney’s new core range, and the Huddart is rated ‘an easy afternoon sipper’ although Broom can’t help but feel it’s just getting started.

A Cadenhead bottling of an OP 12-year-old is light and cool with crisp acidity. However, despite an inherent freshness, the whisky leans heavily on its maritime distillery character.

Things round out with the core range’s 15-year-old, finished in first-fill ex-oloroso Sherry butts. With a little salt and white chocolate on the finish, Broom feels the malt hits its mark with aplomb.

The range’s 18-year-old is matured the same way but there’s more of the cask on the nose, with coconut and dried fruit peeking through. The best-ranked of the bunch, it’s perfect for a sea shanty or two.

Finally, a 33-year-old from Port Askaig moves from dark to peachy, from refined to medicinal. It’s a gentle dram, says Broom, and ‘a lovely way to end the year’.

This week’s playlist ebbs and flows from the rock ‘n’ roll stylings of Link Wray to a burst of freshness from Outkast. Merry Christmas everyone!