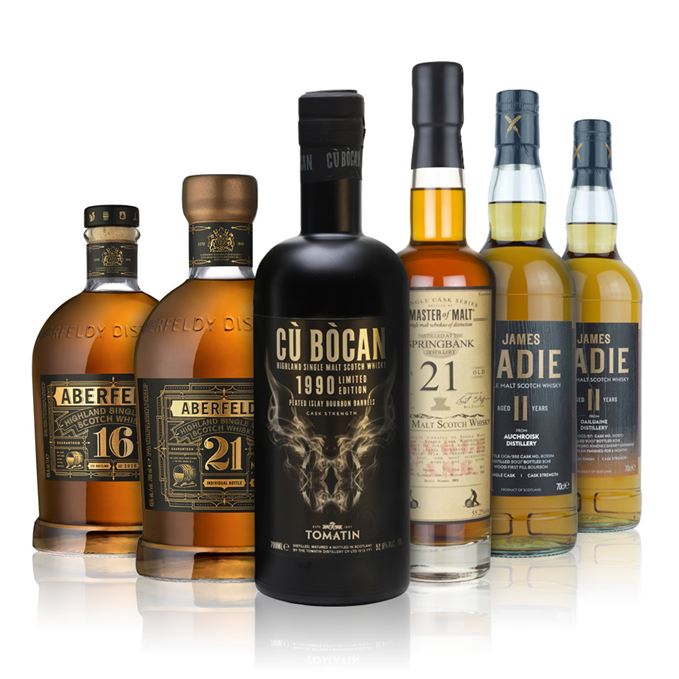 Dave Broom’s first tasting since the New Year rang in demonstrates why cask finishing is a trickier process than one might imagine.

It’s a slow start, as two 16- and 21-year-old travel retail exclusives from Aberfeldy distillery fail to shine through a 12-month finish in ex-Bual and ex-Malvasia Malmsey casks (Madeira to the uninitiated). Deemed ‘flabby’ and ‘bland’, Broom surmises ‘there’s no sense of maturity or direction’.

The first of two James Eadie bottlings picks up the pace. An 11-year-old Auchroisk matured entirely in an ex-Bourbon cask, Broom deems it ‘altogether lovely’, and a complex dram despite a young age.

Separating the Eadies is a limited edition peated single malt from Cù Bòcan, distilled at Tomatin distillery. Though despite its use of peated malt, and finish in ex-Islay whisky casks, its smokiness – and substance – is aloof.

The second of the Eadies presents a richer and rounder flavour profile, being an 11-year-old Dailuaine finished in ex-Pedro Ximinez Sherry butts. The distillery’s signature meatiness is prominent, with the PX spreading blackberry jam across the palate. Sadly, Broom laments its lack of depth and direction.

Finally, a 21-year-old single cask Springbank, bottled by Master of Malt, is ‘distinctly rich and meaty’ with a savoury finish and the grip Broom has missed from the rest of this week’s tasting.

Still, he proclaims this week’s playlist to be a pretty good one, with tracks from The Smiths, The Beach Boys and Tom Jones.

Batch 180 21/12/2018 Dave Broom rounds out the year with a party of Pulteneys and Big Peat’s annual festive bottling.
View All
Scroll To Top