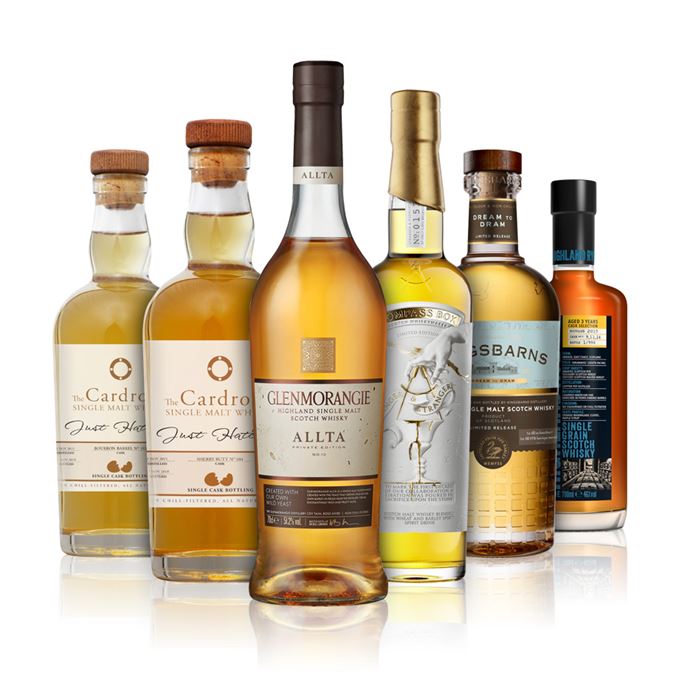 In complete contrast to last week’s roundup of ancient whiskies, this week Dave Broom turns his attention to some of the youngest drams new to shelves.

If there is a theme, it is new developments, be they from distilleries (Kingsbarns, Arbikie and New Zealand’s Cardrona) launching their first whiskies; to production, with Glenmorangie’s use of its own yeast strain for Allta. There’s even developments in challenging blending convention, with Compass Box’s use of one-year-old spirit on its latest bottling. ‘These are all important whiskies,’ Broom says, ‘statements of intent, which are opening up new areas.

‘The whiskies have been scored within their competitive set,’ he says, ‘which is worth bearing in mind for the youngest members of the group. Should you care about scores, of course.’

It’s a punchy start, with a spicy rye whisky from Highland distillery Arbikie. With a nose of ‘fresh citrus zest’ and finish of ‘crackling spices’, it’s a ‘wee belter’ that shakes things up.

New Zealand whisky newcomer Cardrona features in the next two tastings, the first aged in ex-Bourbon barrels and the second in ex-Sherry butts. Despite only ‘just hatching’, Broom finds they are a welcome addition to the whisky world.

Compass Box is up to its boundary-pushing ways again with its Stranger & Stranger spirit drink. While the addition of 1% one-year-old Girvan grain technically means it cannot be legally defined as a whisky, Broom finds it has a freshness that showcases ‘what blending is all about’.

Glenmorangie’s 10th expression in its Private Edition series, Allta, pushes development in flavour creation through the use of a strain of local yeast found growing among its own barley fields.

To wrap up this week’s tastings is Kingsbarns’ first official whisky, Dream to Dram. With a persistent sweetness that is balanced by a peppery heat finish, Dream to Dram shows ‘huge potential’ for the Fife distillery.

Mixing psych, folk, and the two genres together, the songs in this week’s playful and upbeat playlist reflect the sweet and lively young whiskies in the selection. Click the links in Right Place, Right Time.