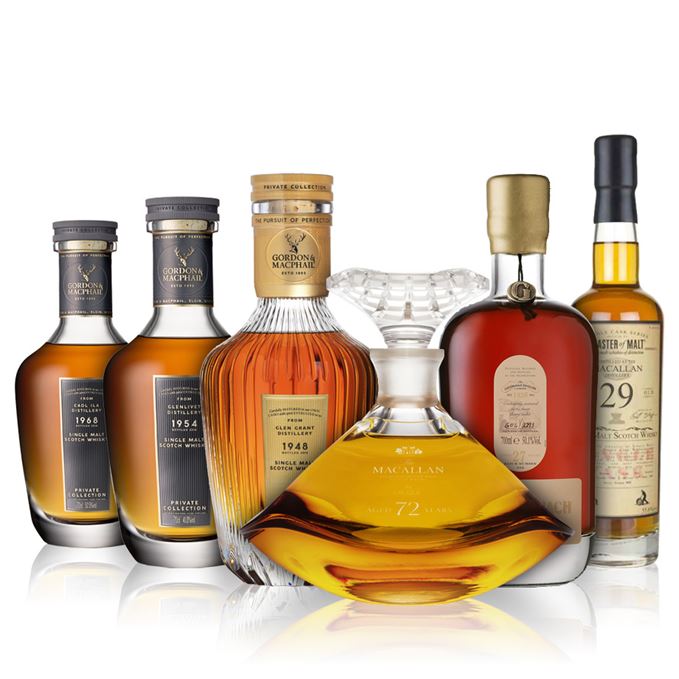 There’s 316 years of whisky on show this week (and approximately £86,500 worth of it, so you’d best get saving) and a rare – maybe a one-off – chance to try a selection of venerable drams. Though ranging from a relatively young 27-year-old to a mighty 72, each from very different distilleries and cask types, there is a shared quality: slowness.

‘These aren’t whiskies to be rushed,’ says Dave Broom. ‘Not because you’re conscious of the meter running with every sip taken, but because they evolve slowly in terms of aroma and palate. At their best, they put you in a different place: thinking of when they were made, who made them and how air, wood, and spirit have warped them in fascinating ways over time. They are twisty and oblique, not straightforward. Breaking with convention, I’ve given prices as it’s instructive in cases like these.’

First up is a 50-year-old Caol Ila from Gordon & MacPhail (G&M) said to be the oldest bottled to date. Even after half a century, smoke is present alongside distinctive Caol Ila juniper. A must-try.

The 10th expression in GlenDronach’s limited edition Grandeur range, the youngest in today’s line-up is also the most cask-forward, as the 27-year-old upstart is dominated by sweet, dark fruits.

Back to G&M for a 70-year-old Glen Grant, another ‘oldest’ bottling. At this advanced age, it still packs a punch with an expansive, mouth-filling texture and glorious burst of waxy fruits on the finish.

Another G&M, this time a Glenlivet distilled in 1954, is an oily dram in the era’s classic style, with bakery notes (‘woodsmoke, hot pastry, apple turnover’) and a sense of fragility. A whisper of water adds more, but tread carefully.

A 29-year-old Macallan from Master of Malt, distilled in 1989, offers a considerably more expressive palate when compared to its rather demure nose, so don’t be fooled. It’s soft and pillowy, adding a meatiness with another splash of water.

Last but not least is the 72-year-old Macallan, resplendent in its Lalique decanter. With a ‘well mannered restraint’ on the nose and an interplay between acidity and woody notes on the palate, the price and age is discussed in more detail this week in the From The Editors section – however, it doesn’t quite manage to knock the Caol Ila from today’s top spot.

This week’s soundtrack is suitably slow and ambient, from languid electronica to delicate piano pieces.

Batch 183 18/01/2019 Pitting Master of Malt against Gordon & MacPhail as both bottlers take on Chivas distilleries.
View All
Scroll To Top