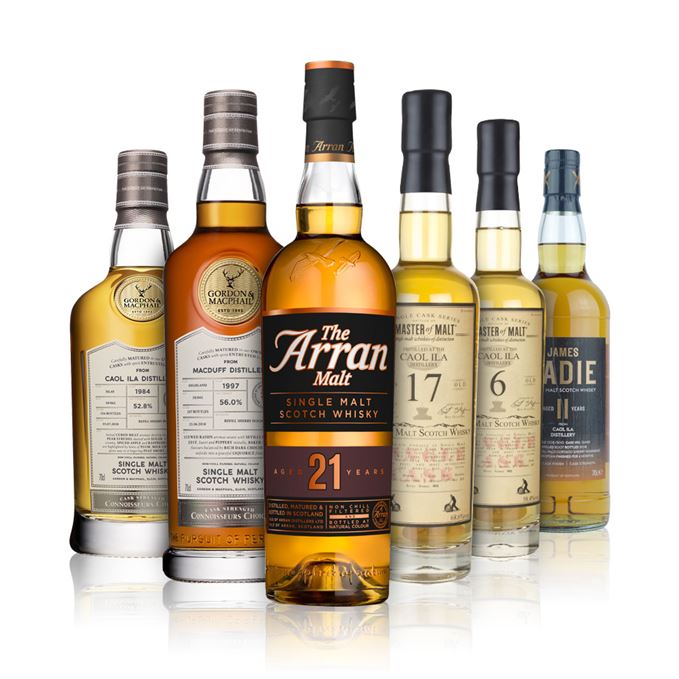 Islands – and the coast – are the theme in a week dominated by a quartet of indie-bottled Caol Ilas, showing Dave Broom four different facets of the distillery. The Islays are sandwiched between a 21-year-old from Arran and a haunting bottling from the enigmatic Macduff.

As the oldest whisky in its core range (the distillery opened in 1995), Arran’s new 21-year-old is soft and fruity with a hint of piney coastalness. ‘How did Arran get to be 21 years old?’ Broom wonders, aghast at the passing of time.

Onto the first Caol Ila, as Broom finds a six-year-old from online retailer Master of Malt demonstrates more depth than a lot of distillery-forward, peaty malts of a similar age.

An 11-year-old Palo Cortado-finished expression from James Eadie meanwhile is a decent, easy-drinking dram with some rich fruitiness imparted by the Sherry cask finish.

Master of Malt’s second Caol Ila of the bunch is a 17-year-old bottled at a tempestuous 68.6% abv. ‘Drinking as an exercise in masochism,’ concludes Broom, likening it to a wild, stormy sea.

Out of the storm and into the restaurant, the final Caol Ila is a 33-year-old from Gordon & MacPhail’s Connoisseurs Choice range that’s all ‘smoked scallops, lobster shell stock and light smoky bacon’.

It’s a return to the mainland for Broom’s last whisky, a 20-year-old Macduff from a refill Sherry hogshead. The ghost of a leathery note reminds Broom of the legend of an old boot said to haunt the Highland distillery. Spooky, and a little stinky.

This week’s playlist is a little more nautically inclined, verging from bluesy ocean odes to sailor's shanties, all guaranteed to shiver your timbers. Avast!