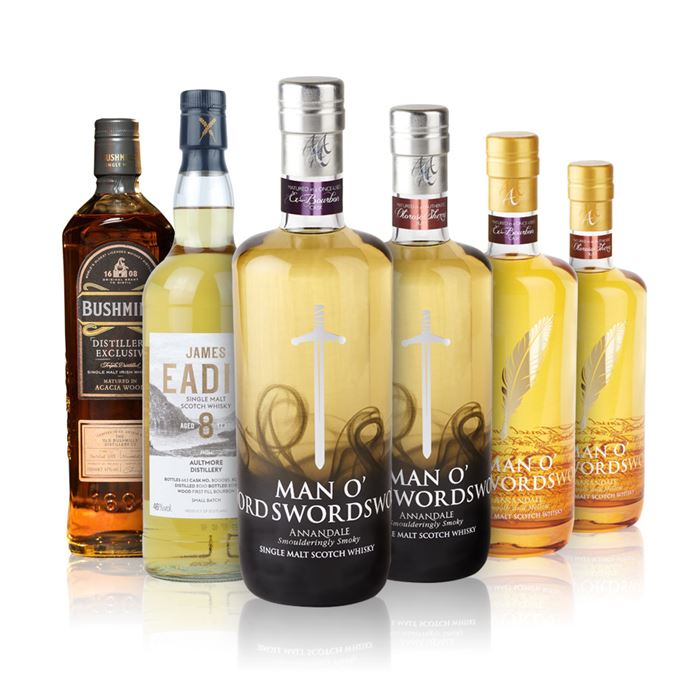 Dave Broom’s main focus this week is on four single casks from fledgling distillery Annandale – they grow up so quickly, don’t they? – alongside a cask experiment from Bushmills and an Aultmore from indie bottler James Eadie.

Annandale’s whiskies are sliced into the peated Man O’Sword and the unpeated Man O’Words, all distilled in 2015. Broom finds the first unpeated three-year-old from an ex-Bourbon cask has already got balance, a sign of good things to come.

However, Broom tries the Man O’Words ex-oloroso cask and senses Sherry ‘might be an ideal match’ for the distillery, with more subtlety even at this young age.

On to the Man O’Sword offerings, said to be inspired by 7th Earl of Annandale Robert the Bruce. The Bourbon cask boasts brushfire smoky aromas, but gives way to syrupy desserts on the palate.

The peated Sherry cask somewhat quells the smoke upfront, adding furniture polish notes that ‘already show balance and integration’ according to Broom. The highest scorer of the four.

An indie-bottled eight-year-old Aultmore from James Eadie shows off the distillery’s Speyside characteristics with plenty of orchard fruits and elderflower. Broom rates it a classic example of Aultmore, said to be fragrant on the nose but substantial on the palate.

Finally, a distillery-exclusive bottling from Bushmills is finished in acacia wood casks, which (Broom believes) has provided a few exotic elements like Medjool dates alongside flavours such as marmalade on toast. Just keep Paddington away from the whiskey.

While Broom fends off raincoated bears, this week’s playlist is full of ska and reggae from the likes of Sunny Waller and Alton Ellie. Click on the links in ‘Right Place, Right Time’ to hear more.

Batch 187 15/02/2019 A quartet of indie-bottled Caol Ilas, a spooky Macduff and Arran's oldest core release yet.
View All
Scroll To Top