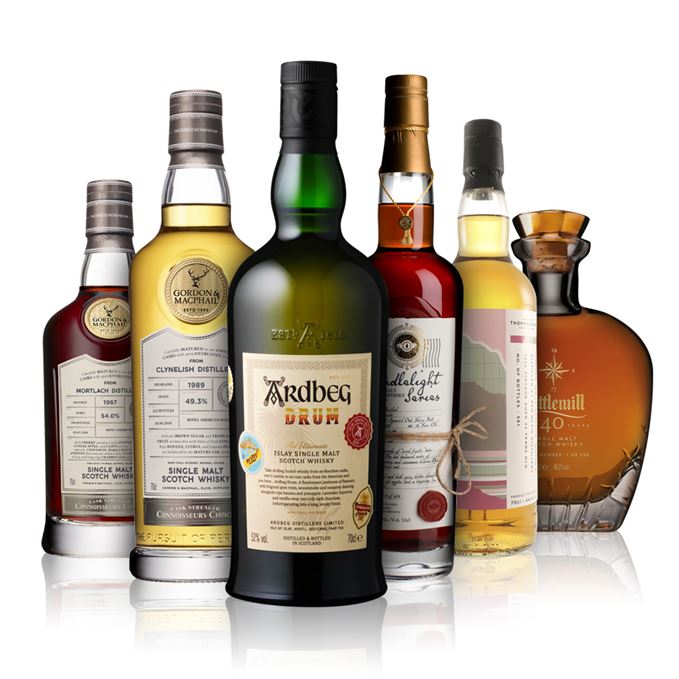 Ardbeg Drum, the cult Islay distillery’s 2019 Committee bottling for Ardbeg Day (1 June), and its first stab at rum cask-finishing, is surprisingly quiet for such a rowdy distillery but Broom finds it a bit of ‘easy-drinking fun’. Good luck getting your hands on one, though.

A 22-year-old single cask Ben Nevis bottled by the Thompson brothers (the duo behind Dornoch distillery and neighbouring hotel) is found to be a typical Nevis offering with Weetabix, sour cream and oiliness, but a good one at that.

On to the first of two Gordon & MacPhail (G&M) Connoisseurs Choice bottlings. A 1989 Clynelish is ‘fragrant and rewarding’ although Broom reckons after 28 years it’s only just getting going.

Down to the Lowlands now, as a 40-year-old Littlemill is so full of wood on the nose it reminds Broom of a workshop – in a good way. One to seek out if you have £6,000 to spend.

Back to G&M for the first in a duo of Mortlachs, as a 31-year-old Sherry bomb detonates with notes of roasted meat and earthy, cask-forward elements.

The final expression, another Sherry-matured Mortlach bottled by Whisky Illuminati, is almost Port-like in its consistency. Water thins things out substantially, so best enjoy it as nature intended.

The soundtrack to this week’s batch is suitably eclectic, ranging from the beaches of the Caribbean to the concert halls of Germany. Hit the links in ‘Right Place, Right Time’ to hear more.

This article contains affiliate links, which means we may earn a small commission if a reader clicks through and makes a purchase. All our journalism is independent and is in no way influenced by any advertiser or commercial initiative.
Advertisement

Batch 191 15/03/2019 An old Benromach, a blended malt and Daftmill’s Winter Release surround a trio of Tomatins.