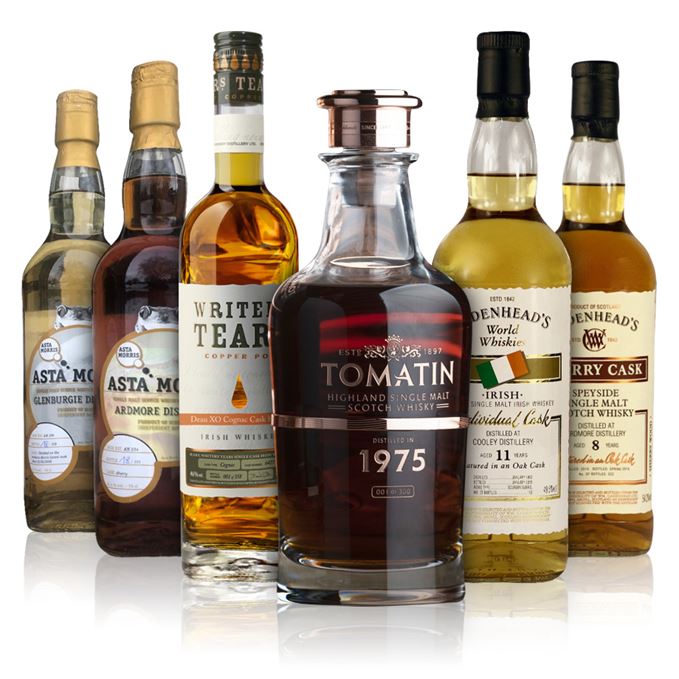 Dave Broom samples a pick ‘n’ mix bag of goodies this week, featuring two young Ardmores, a Glenburgie, and a brace of Irish whiskeys all topped off with the latest in Tomatin’s delvings into its Warehouse No. 6.

Indie bottler Asta Morris starts things off with a five-year-old Ardmore, which Broom finds some filthy, funky fun here; its combination of spicy curry, fruit and lingering smoke flavours makes it a knockout.

A second, although only marginally older, Ardmore from Cadenhead is brimming with big Sherry notes – luscious, sticky and unctuous, says Broom.

The next dram, an 11-year-old Irish whiskey from Cooley distillery (a new release yet distilled in 1992), offers some springtime sweetness to the tasting. With the whisky flicking between fruits and artificial confectionary, Broom is left debating whether to head to a sweet shop or an orchard.

Asta Morris’ 10-year-old Glenburgie, a usually fruity Speyside number, has been given a Caroni rum cask finish, but is overwhelmed by abrasive fumes. Petrol has no place in rum, Broom says, and even less so in whisky.

Tomatin 1975 is the newest expression from the Highland distillery’s Warehouse 6 Collection. The 43-year-old whisky offers a lasting fruity sweetness that Broom reckons is worth the substantial price for a bottle.

The tasting ends with another dram from the Emerald Isle, this time a blend of single malt and pot still whiskeys from Writers’ Tears. This fourth expression in the range comes with a French connection, having spent nine months finishing in ex-Deau XO Cognac casks. It offers light layers of chocolate, spice and fruits, which stands in contrast to the whiskey’s salty name.

The playlist is similarly eclectic, moving from Jefferson Airplane’s chunky psychedelia to a Musical Youth classic and Dr John’s voodoo ceremony. Bill Callahan comes in to add a sense of calm. Follow the links in Right Time, Right Place.

Batch 197 26/04/2019 Compass Box’s Calvados-Scotch blend, plus the first releases from the Whisky Sponge.