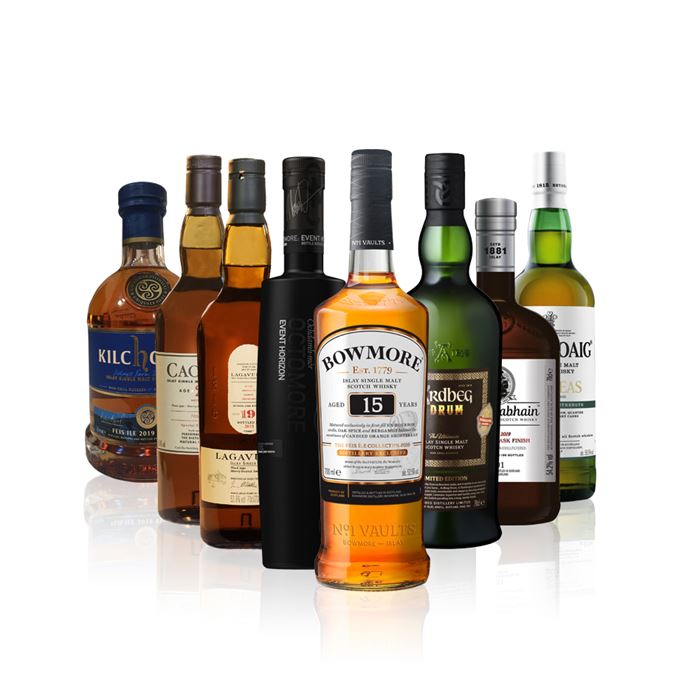 Dave Broom does a roundup of (most) of this year’s official Fèis Ìle bottlings (some were sold out before he could grab ‘em). The conclusion? This has been a stellar year. It’s interesting, or just plain weird, how the whiskies move from lighter to heavier in alphabetical order. There are nods of similarity between the many variations on smoke, oils, resinous elements, sweetness and fruit, yet they all retain their individuality.

Ardbeg sets the tempo for this week’s tastings with its non-age-statement single malt, Drum. Having been finished in ex-rum casks from the Americas, the expression stays in keeping with its Caribbean theme with elements of bananas, coconut and smoke.

The youngest of Bowmore’s 2019 festival releases is a 15-year-old whisky aged in ex-Bourbon casks (the other was a 23-year-old Sherry cask), with salty aromas that combine with tropical fruits and citric qualities to create a ‘summery’ dram.

Heading to north Islay, this time for Bunnahabhain’s 2001 Sauternes cask finish. Sweet and rich, ripe fruits bring a lusciousness that cannot be tempered, even with the addition of water. It was one of three festival releases from the distillery, alongside a 1988 Champagne cask finish and 2008 Moine (peated) whisky finished in French oak – neither of which Broom was able to taste.

A sweet shop meets a chef’s kitchen with Kilchoman’s festival release, a vatting of a 2007 ex-Bourbon cask and 2008 ex-oloroso Sherry butt. Notes of burnt rosemary and thyme mingle with strawberry Haribo and foam bananas to create a soft, understated dram.

Things take a heavy turn with Lagavulin’s expression, a 19-year-old whisky with weighty layers of dark fruits, peat bonfire and liquorice that lead to a long, smouldering finish.

Bottled exclusively for the Friends of Laphroaig collective, the 2019 Laphroaig Càirdeas expression is a ‘triple-matured’ oily and resinous whisky, softened only by its green elements of eucalyptus and chypre.

Bruichladdich brings the first batch of 2019 Fèis Ìle tastings to a ‘massive’ close, with the oldest Octomore released by the distillery – Event Horizon. With smoke balancing a strong Sherried influence, this is not a dram for the faint-hearted, says Broom.

The playlist kicks off with Love and Santana on the beach, dallies a while with Zappa, chills with Shabaka Hutchings and Jon Hassell before taking a heavier turn with Cream, Zeppelin and finally the imploding weight of King Crimson.

Batch 203 07/06/2019 The Islay Fest continues with Scarabus, Aerolite Lyndsay and a smattering of Fèis Ìle drams.

Batch 201 24/05/2019 The new Balvenie Stories range leads a Glenlivet, a GlenDronach and The Moffat blend.
View All
Scroll To Top