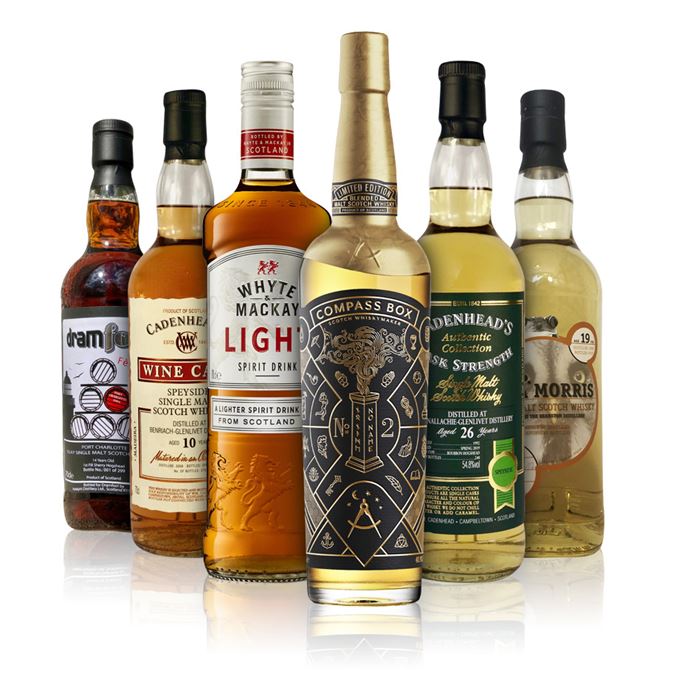 Compass Box’s No Name No. 2 joins an array of indie bottlings from Cadenhead, Dramfool and Asta Morris, along with Whyte & Mackay’s Light spirit drink in this week’s tastings from Becky Paskin and Dave Broom.

Cadenhead kicks things off with its spicy and vinous 10-year-old Benriach bottling. The Madeira hogshead influence brings an acidity and thickness to the whisky, but, says Broom, never overpowers it.

A 19-year-old Deanston bottling from Asta Morris starts with strong distillery character and glimpses of fruits and flowers, but fails to fully develop into its potential.

Cadenhead makes a second appearance this week with a 26-year-old single malt from GlenAllachie. Give the whisky time for its clean, clear fruity character to emerge from the roasted notes.

The second edition of Compass Box’s original No Name expression may not be as smoky as its predecessor, but is a complex dram that draws Broom back, repeatedly.

Another week, another Fèis Ìle bottling – this time a 14-year-old Port Charlotte whisky from indie bottler Dramfool. Big and robust, this is a whisky that won’t please everyone; but for Broom, it’s a belter.

Whyte & Mackay offers some ‘Light’ reprieve to the tastings with its low-abv spirit drink. It’s an easy-drinking dram suited to a Highball or a cube of ice, says Paskin.

It’s an eclectic mix on the playlist this week, as Madeira-fuelled whimsy clashes with coastal rambles by Gerry O’Beirne, and rock hits from Jarvis Cocker, Traffic and Joni Mitchell, before The Royal Philharmonic Concert Orchestra brings things to a serene close.

Batch 203 07/06/2019 The Islay Fest continues with Scarabus, Aerolite Lyndsay and a smattering of Fèis Ìle drams.
View All
Scroll To Top