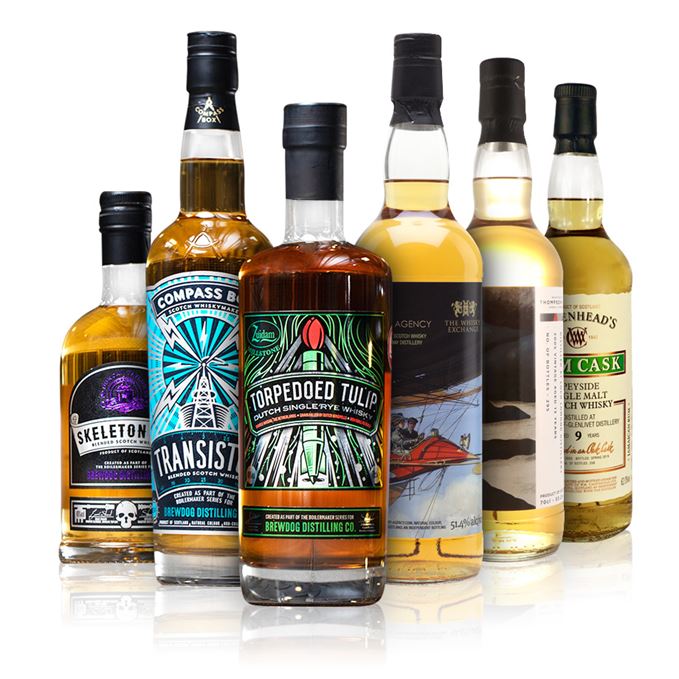 BrewDog’s Boilermaker Series meets bottlings from The Whisky Agency, Thompson Brothers and Cadenhead in this week’s reviews from Dave Broom.

First up is a 28-year-old Glen Moray bottling, created exclusively for The Whisky Exchange by German indie bottler The Whisky Agency. Floral notes of Angelica and honeysuckle weave between hits of peaches and red fruits, creating a sweet and ‘elegant’ dram.

A 13-year-old Inchfad, a heavily-peated but now discontinued single malt from Loch Lomond distillery, has been bottled by Thompson Brothers. The whisky pauses and flows, bringing a wave of new and contrasting notes each time.

Indie bottler William Cadenhead returns with a nine-year-old Miltonduff bottling, which has been matured in an ex-rum cask. Big fruit and hefty heat (a whopping 62% abv) meet in a collision of bananas and sugarcane – Broom finds it all rather ridiculous, and delicious.

Onto Brewdog’s Boilermaker Series, a collection of three whiskies designed in collaboration with blenders to pair with its beers.

The Skeleton Key Scotch blend is the result of a collaboration with blender Duncan Taylor and pairs with the Jet Black Heart stout and Zombie Cake porter. A ‘surprise combination,’ but the whisky’s sweetness and fat chewiness win out.

The next expression in the Boilermaker Series is Torpedoed Tulip, a 100% rye whisky from Dutch distillery Zuidam. It’s a hefty whisky that cannot be tamed by water – and fails to work with its session pale ale pairing, the Dead Pony Club.

Finally Transistor, the Scotch blend by Compass Box designed to pair with BrewDog’s flagship Punk IPA, rounds up this week’s tastings. A gentle whisky that tones down the beer’s feistier elements, Broom thinks they make a wonderful couple.

It’s a gentle start to the playlist with folk ballads from Joan Shelley and Jackie Leven, before Tom Browne shakes things up with some Jamaican funk, and Alabama 3 and Dick Dale keep the tempo pacing. Click on the links in Right Time, Right Place.