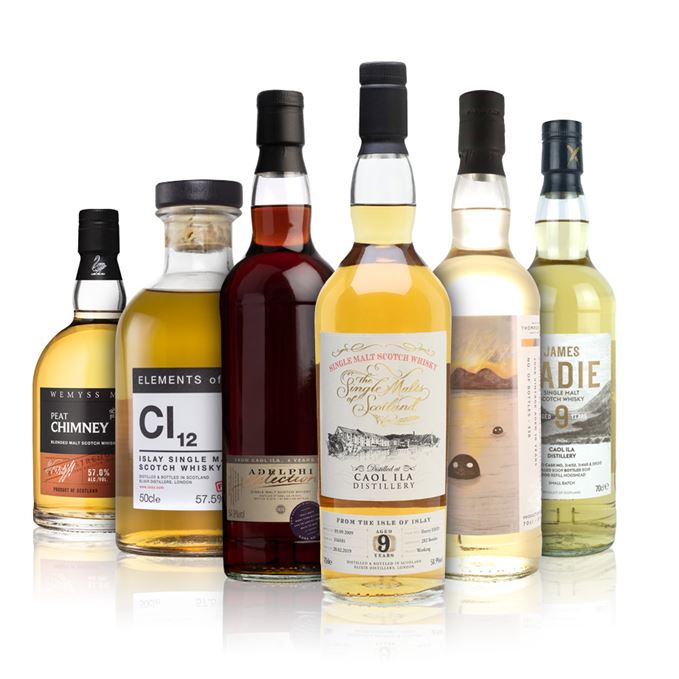 In this week’s whisky reviews Dave Broom samples a concatenation of Caol Ilas (and one cousin), all of which are relatively young in age; but the measurement of time is only one aspect of a whisky’s character. It’s all about the cask and the interaction.

And boy, are there different facets of that happening here. It’s only by doing a tasting like this that you begin to see how a distillery’s character at a similar point in time can then be warped and twisted into different shapes by the cask. All of these whiskies are marked within their competitive set.

It’s ‘bonkers’ from the off with Adelphi’s eight-year-old Caol Ila bottling. Layers of Sherried sweetness, barbecued meats, peppers and smoke integrate with a bitter finish – unexpected character from such a young whisky.

A nine-year-old Caol Ila from James Eadie brings a blast of the Islay distillery’s smoke and signature coastal elements, alongside mint and pear fruit qualities in this well-rounded dram.

Indie bottler Thompson Brothers brings a ‘tidal’ 10-year-old Caol Ila to the proceedings, with each wave bringing a varied element of shellfish, herbs and smoke.

Elixir Distillers’ Elements of Islay brand shakes things up with its Cl12 Caol Ila bottling. ‘Pungent’ notes of rubber and cabbage water are somewhat improved with water – but not enough for it to win favour with Broom.

The final whisky of the week, Peat Chimney by Wemyss Malts, is a blended malt that flicks between nutty sweetness, heat and smoke.

The playlist travels along the coast, dipping into a storm conjured by Ketil Bjørnstad and Terje Rypdal, drifting with Bonnie ‘Prince’ Billy and Nusrat Fateh Ali Khan, word-weaving by Kate Bush and audiobooks, before Robert Wyatt takes us off into the ocean.