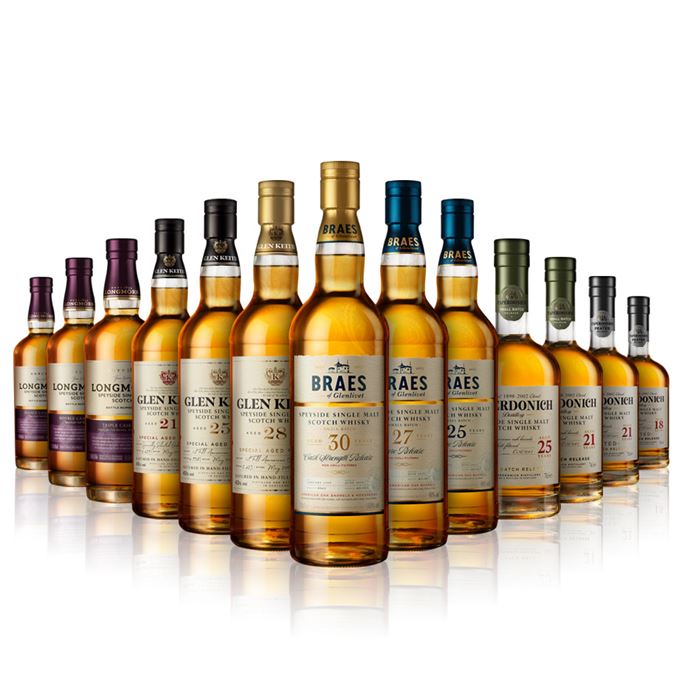 The Secret Speyside Collection is the largest range of single malts yet released by Chivas Brothers, covering 15 whiskies from four of the region’s distilleries: Braes of Glenlivet, Caperdonich, Glen Keith and Longmorn.

It’s perhaps open to question just how ‘secret’ Longmorn is – the single malt has been launched and relaunched in recent years, amid some controversy over pricing – but it’s certainly rare to see releases from the other three distilleries.

If you’ve never heard of Braes of Glenlivet, that’s because it’s been known as Braeval since 1994, to avoid confusion with its more illustrious stablemate. All three of the whiskies here were produced – just – before the change of name.

Whether you buy into regional flavour profiles or not, Richard Woodard finds that there’s a definite theme here of Speysidean fruit flavours running through all four of the distilleries on show, with some of the highlights including an ‘opulent’ 30-year-old Braes, and a ‘serious, but fun’ unpeated offering from closed distillery Caperdonich.

Meanwhile, there’s little to choose between a consistently excellent trio of malts from Glen Keith, and Longmorn’s exotic, hedonistic fruit character is very much to the fore, especially in a standout 23-year-old.

The fruit-fest is only interrupted by two peated Caperdonich bottlings, with the ‘wonderfully aromatic and exotic’ 21-year-old a real highlight. Caperdonich’s two oldest Secret Speyside expressions – 25-year-old peated and 30-year-old unpeated variants – are still in cask and will be released later in the year.

The accompanying music takes in the diverse delights of The Killers, Belle & Sebastian, Mascagni, Elvis Costello, Thom Yorke and Cowboy Junkies. Click on the links in ‘Right Place, Right Time’ to listen.