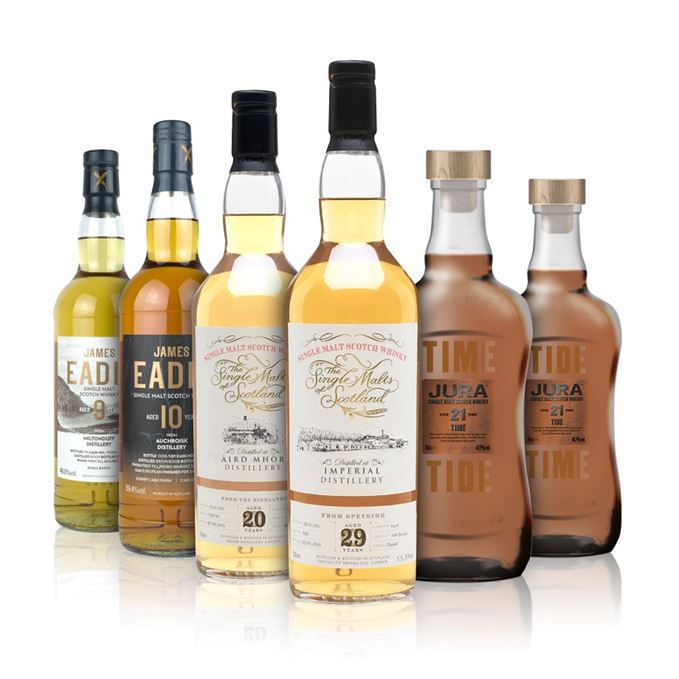 First up is a 20-year-old Ardmore bottled by Elixir Distillers for its Single Malts of Scotland range. ‘Classic’ Ardmore apple/Calvados notes mingle with smoke, which is only heightened with the addition of water. ‘If you have any sense, grab this,’ Broom recommends.

Distillery character remains at the fore with a 10-year-old Auchroisk bottling from James Eadie, which was finished for two years in a Pedro Ximénez Sherry butt. Vinous elements combine with a ‘punchy’ distillery character to create a well-balanced dram.

The second bottling from Single Malts of Scotland this week comes from closed distillery Imperial. With complex layers of tropical fruits, ‘buzzy’ heat and Vin Jaune, Broom deems this 29-year-old whisky ‘one of the best’ from the lost Speyside distillery.

Jura continues its revival with Time and Tide, a 21-year-old single malt duo that pays tribute to the distillery’s island home. Tide offers depth with black fruits and toasted cereal notes, while the travel retail exclusive Time is the more structured whisky of the pair with layers of caramel toffee, smoked barley and ripe fruit.

Miltonduff, a regular component in Ballantine’s blended Scotch, appears this week as a nine-year-old bottling from James Eadie. Fragrant notes reminiscent of a flower stall and light fruits create a summery dram comfortable ice-cold on its own, or in a long cocktail.

The playlist rambles from an autumnal Captain Beefheart to Lee Hazelwood and Nancy Sinatra’s sleazy summery lust, via Kate Bush’s sensuality, Julianna Barwick on the beach and the Silver Jews having second thoughts.