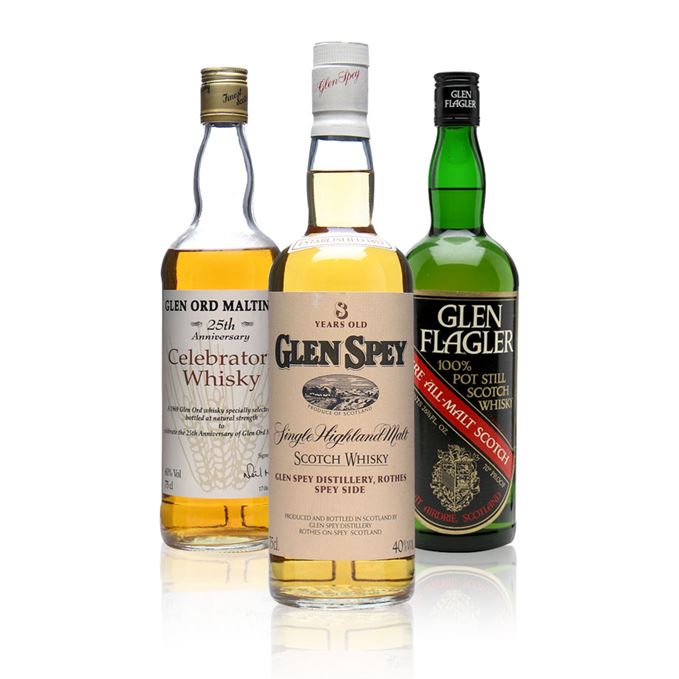 Glen Flagler was one of the shortest-lived single malt distilleries, founded in 1965 by Inver House Distillers within its Moffat complex in Airdrie, which was also home to the vast Garnheath grain distillery. Mainly used for Inver House’s blends, it was also bottled as both a blended and a single malt before closing for good in 1985.

Here we have an NAS (no age statement) bottling from the 1970s, aimed at the Italian market in an effort to exploit that country’s love of young, fresh whiskies. It’s fair to say that Broom isn’t entirely taken with the result.

Our second whisky is altogether more successful. A Glen Ord bottled in 1993 to mark the 25th anniversary of the distillery’s maltings, it has a ‘deservedly celebratory feel’, Broom says. Glen Ord remains one of only three distilleries currently self-sufficient in its malt requirements (along with Roseisle and Springbank).

We close with a ‘blooming’ example of distillery character from Glen Spey, perhaps the most easily overlooked of the distilleries of Rothes in Speyside. Founded in the same year as its more illustrious neighbour, Glenrothes, Glen Spey is rarely seen as a single malt bottling. This expression dates from a turbulent period for the distillery – it was rebuilt during the early 1980s, and closed down between 1984 and 1989.