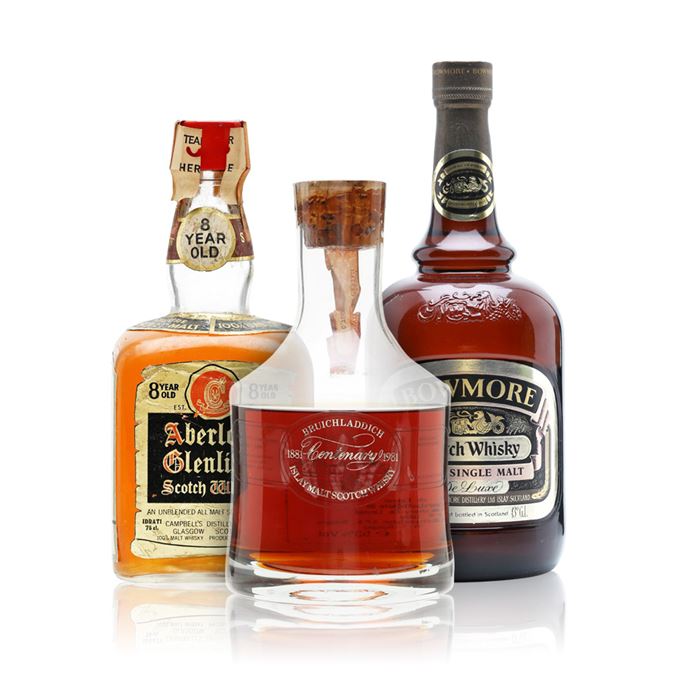 For this old and rare tasting Angus MacRaild has dug up a hat-trick of official bottlings from the 1970s and 1980s that display freshness, power and the very best of their respective distillery characteristics. However, MacRaild says each one also remains something of a reminder that storage conditions and fill level can affect the liquid once an old bottle is opened.

First up is one of the old Aberlour 8-year-old ‘cube’ bottlings, a series released during the 1960s and 1970s by the Speyside distillery, often at an unusually high 50% abv – the series is considered a forerunner of Aberlour A’Bunadh with its punch, power and muscle. Dave Broom reviewed a similar bottling in 2017, but MacRaild has selected one of the series’ darker, more Sherry-driven vattings this time.

Next up is a one-litre bottling of Bowmore Deluxe, a no-age-statement official bottling produced in the late 1970s and early 1980s by the Islay distillery, in this particular instance for the duty free market at the old export strength of 43% abv. MacRaild freely admits to being something of a ‘sucker’ for this old 1960s style of Bowmore, which has opened up after spending some time in an open bottle.

Finally it’s the turn of a Bruichladdich 15-year-old bottled by the distillery to mark its centenary in 1981 – a cask strength version bottled at 53% abv for the Italian market. MacRaild notes that this Sherried, fruity whisky has divided opinion among whisky enthusiasts over the years due to excessive evaporation caused by an inadequate decanter closure. However, he remains impressed by its robustness of character.