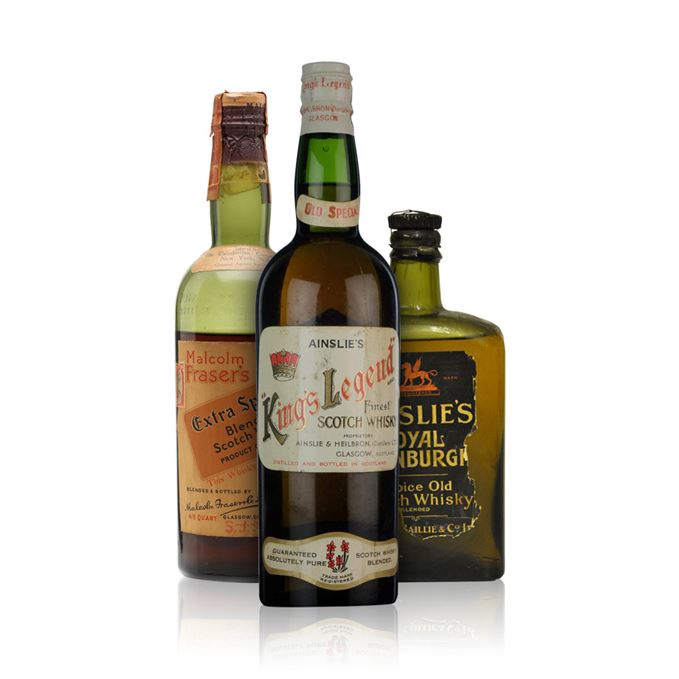 For this week’s tasting Angus MacRaild returns to the world of old blends to see how whisky flavour develops and changes in the bottle, and how they can give as a glimpse into the character of malt whisky from bygone eras.

MacRaild begins with the first of a pair of old Ainslie’s blends, a brand renowned for using Clynelish as a major component. The first is a 1950s Ainslie’s King’s Legend, which was sealed with a spring cap. However MacRaild notes that these capsules, while effective at preserving a bottle’s fill level, can taint their bottle’s contents after several years, manifesting in excessively metallic, vegetal, sometimes acidic and cardboardy taste. MacRaild finds a degree of all these aspects in the King’s Legend, but also a sense of the original character and potency of the whisky within.

Much more satisfying is the even rarer Ainslie’s Royal Edinburgh, which was bottled sometime between 1913 and 1921 when the brand was owned by Ainslie Bailley & Co. Ltd of Leith. MacRaild finds it to be a ‘heartbreaking’ time capsule of early 20th century flavours, and notes how cork is a better preserve of a whisky’s quality and character over the decades, despite allowing for a little more evaporation.

A bottle of Malcolm Fraser’s Extra Special 17-year-old blended Scotch rounds things off. This whisky was bottled for America in the late 1940s, with its lead foil seal indicating it was bottled after the war when excess metal was no longer prohibited from non-essential use. Interestingly, this bottle had lost a significant amount of its filling level, meaning the alcohol had dipped noticeably. MacRaild marvels at the retention of flavour and character in spite of this evaporation – not to mention the old-style intensity of the peat flavour.