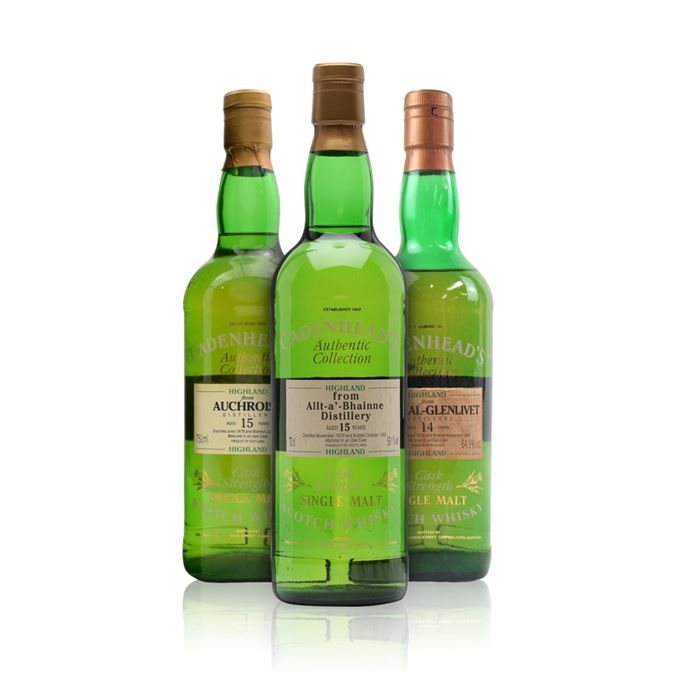 During the 1990s Wm Cadenhead bottled a multitude of single malt bottlings under its Authentic Collection label which Angus MacRaild claims could be described charitably as ‘intellectual’ or ‘challenging’. Perhaps less charitably, he says, they could also be labelled: ‘tough’, ‘difficult’, ‘extreme’, or, as they are often termed ‘crazy’. Thankfully, as MacRaild notes, they are also often fun as well.

Almost always pale whiskies from older refill casks, bottled at younger ages and often very high strengths, these are the kinds of malts that would later find their way into higher profile series such as the Rare Malts at more mature ages. They hail from an era when water and cask shortages often led to fillings being done at unreduced strengths, a practice that led to exceptional whiskies when at greater ages, but rather extreme and austere characteristics in youth.

First up is an example from one of Scotland’s lesser-known and ‘least loved’ distilleries: Allt-a-Bhainne. Distilled in 1979 and bottled in 1995, MacRaild finds it clean but crushingly dull and devoid of life or character. No danger of Allt-a-Bhainne ascending in the collective estimation any time soon based on this particular example.

Thankfully a 1978 Auchroisk bottled in 1993 is a considerable improvement that displays some good malty, cereal character and works well with water, although MacRaild still finds it a tad lacking in overall personality.

Which is not something you could say for the final dram, a 1979 Imperial bottled in 1993 at a whopping 64.9%. MacRaild finds it a terrific, bold and characterful example of this sadly departed make, and a shining example of how the old Cadenhead Authentic Collection series really exposed the raw character of Scotland’s distilleries during the late 1970s/early 1980s era of production.

Rare Batch 52 21/11/2018 A trio of early releases from the SMWS, including Glendullan, Glen Esk and Inchmurrin.