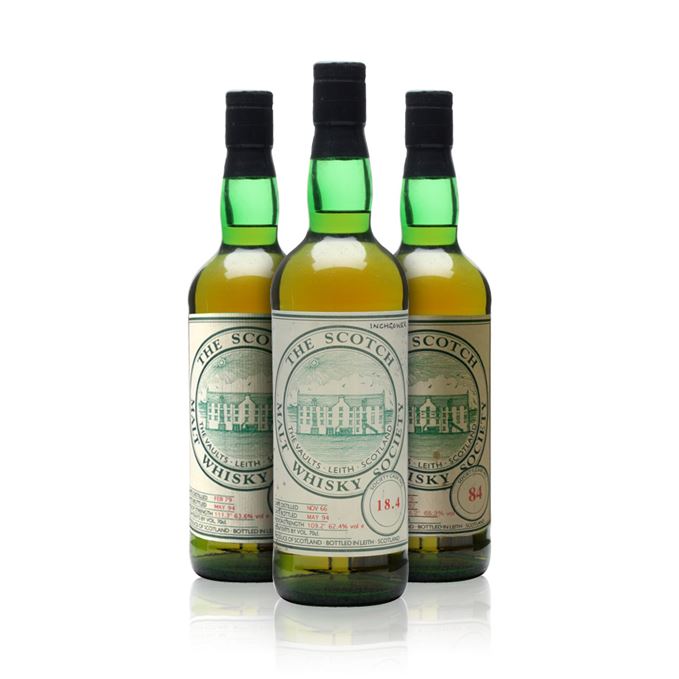 Given the prolific but also somewhat closed nature of the SMWS during the 1980s and 1990s, many of the bottlings from this era are still largely unknown, even to long-time, dedicated enthusiasts today. It’s something Angus MacRaild thinks makes them a wonderful source of surprising discovery and general tasting fun in an era when so many of the other independent bottlings from the ‘80s and ‘90s have been well documented.

Kicking things off is an eye-wateringly high strength example of Glendullan. Distilled in 1978 and bottled at 65.3% abv at 14 years old, this one is notable for being released in a half bottle and simply labelled with its SMWS distillery code ’84’, rather than the usual distillery and cask number system. MacRaild finds it to be total rocket fuel, but not without its charms, especially once water is added.

Following on is a 1979 Glen Esk bottled in 1994, also at a similarly nerve jangling strength of 63.6% abv. However, MacRaild finds it to be a fascinating whisky that reveals a slightly frustrating dislocation between nose and palate. Despite this the overall impression is one of deliciously waxy and enchanting old-school Highland malt whisky.

Unintentionally though, the best is kept for last with a stellar 1966 Inchmurrin bottled in 1994 at 62.4% abv. MacRaild finds the mix of exotic fruits, oils and waxes balances in perfect harmony with the plush and more extractive woody tones and spices. Exactly the kind of hidden gem, he says, that can be found among the earlier SMWS bottlings.