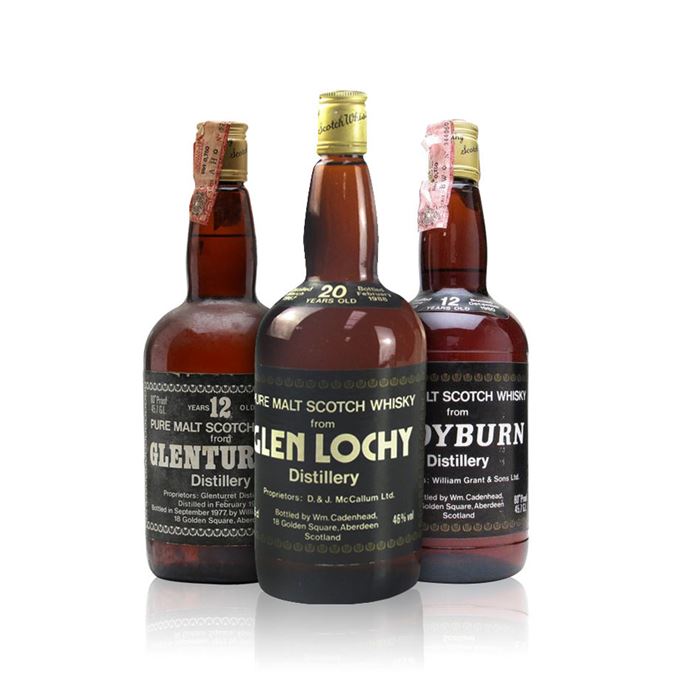 MacRaild kicks off the New Year with a diverse trio of illustrious Cadenhead Dumpies.

First appearing in 1976 and lasting until 1991, Cadenhead bottled a remarkable number of whiskies in its identifiable ‘Dumpy’ livery.

The bottler was ahead of its time in terms of bottling at higher strength, presentation using bespoke distillery fonts, and limited runs of small batches and single casks. The Dumpy series has gathered a hefty cult status among whisky enthusiasts over the years, Angus MacRaild notes, with plenty of dedicated collectors vying to own a bottle.

MacRaild selected three bottles for this tasting. First up is a 1967 Glenlochy bottled at 20 years old in 1988, at this series’ usual strength of 46% abv. He finds it a ‘sublime’ example of a ‘lamentably lost’ west coast Highland distillery and an underrated gem in the Dumpy series.

From such heights MacRaild sinks to dark depths with a 1965 Glenturret, bottled in 1977. It carries a certain notoriety for rather awful soapiness, which MacRaild affirms to his horror upon tasting it. Not a whisky he’ll be drinking again anytime soon.

The standard is remedied by the final whisky, a genuine rarity even by Cadenhead Dumpy standards: a 12-year-old Ladyburn distilled in 1968. Ladyburn was a malt produced within the Girvan grain complex between 1966 and 1976. It has appeared as official aged bottlings and among other independent bottlings such as Signatory under the name ‘Rare Ayrshire’.

However, Cadenhead was the first to bottle the malt and the only bottler to do so at such a young age. MacRaild finds it a sweet, naturally sugary treat of a dram with an easy-going, natural maltiness that reminds him that Ladyburn is not only a rarity, but also a very good whisky.

Rare Batch 54 19/12/2018 A rare Karuizawa and cult whiskies from Laphroaig and Royal Brackla astonish MacRaild.
View All
Scroll To Top