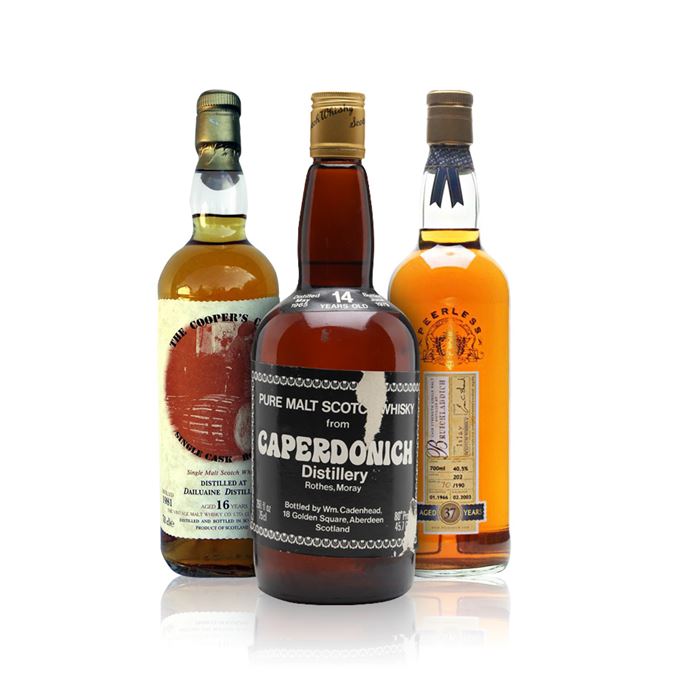 This week’s rare whisky tasting is a bit of a mixed bag, with the closest correlation between the whiskies being that the distilleries consecutively follow three letters of the alphabet. However, as Angus MacRaild discovers, they are similarly grouped in terms of quality.

First up is a 37-year-old Bruichladdich distilled in 1966 and bottled in 2003 by Duncan Taylor. At only 40.5% abv MacRaild finds it an ‘unusual’ and enjoyable but undeniably tired, old dram.

Next up is a Caperdonich distilled in 1965 – the distillery’s first year of production since 1902 – and bottled 14 years later as part of the Cadenhead Dumpy series. MacRaild finds it an unusual but highly entertaining dram that serves as a neat illustration of how the later, highly-acclaimed older bottlings of Caperdonich evolved in their youth.

The most surprising dram of the flight, however, comes last in the form of a 16-year-old 1981 Dailuaine bottled in 1998 by Cooper’s Choice. MacRaild lauds its unusually medicinal profile and overall completeness, which he claims is an unusual but thrilling departure from the classic Dailuaine profile of the early ‘80s. This is still a relatively inexpensive bottling at auction and, as MacRaild notes, is worth seeking out.

Rare Batch 66 05/06/2019 A trio of Islay whiskies, including the oldest Caol Ila ever bottled, deliver high scores.
View All
Scroll To Top