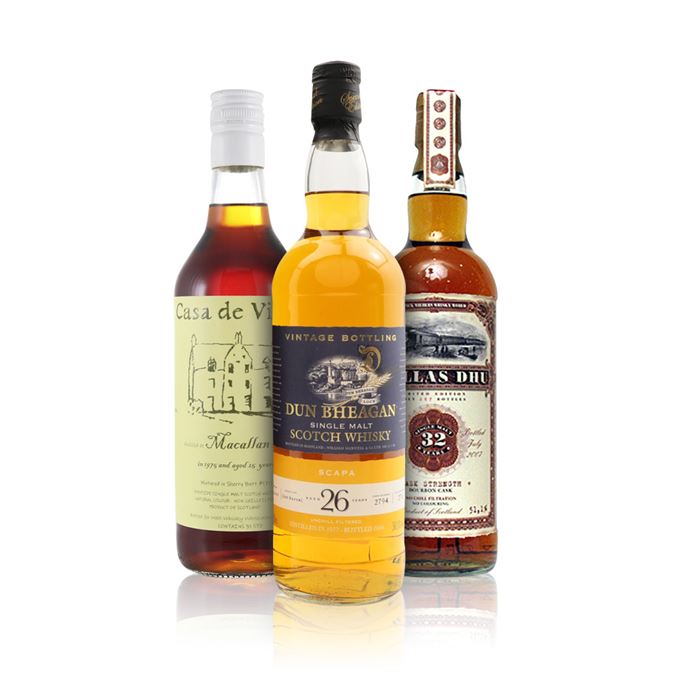 First up is a 1974 Dallas Dhu bottled at 32 years of age by Jack Wiebers for its Old Train Line series. Despite being matured in an ex-Bourbon barrel, this whisky behaves more like a Sherry-matured malt, says MacRaild. Like many of Dallas Dhu’s 1970s whiskies, it is, in his view, slightly underwhelming.

The same cannot be said about dram number two, a 1975 Macallan bottled at 25 years old by Australian whisky company Malt Whisky Wholesalers for its Casa de Vinos label. MacRaild finds it a ‘stunning’ example of old-school, Sherried intensity. It is the kind of liquid that Macallan built a global reputation on, even if it was – arguably – distilled at what is now technically a closed distillery (Macallan opened its new distillery in June 2018, mothballing its original site).

Rounding things off is an unusually light and fragrant example of Scapa distilled in 1977 and bottled at 26 years old by William Maxwell & Co. as part of its Dun Bheagan series. It is supposedly matured in an ex-rum barrel, but MacRaild is personally relieved to find that the cask has had minimal influence on the whisky. Instead, he notes, it’s an extremely light, fragrant and ethereal Island dram.