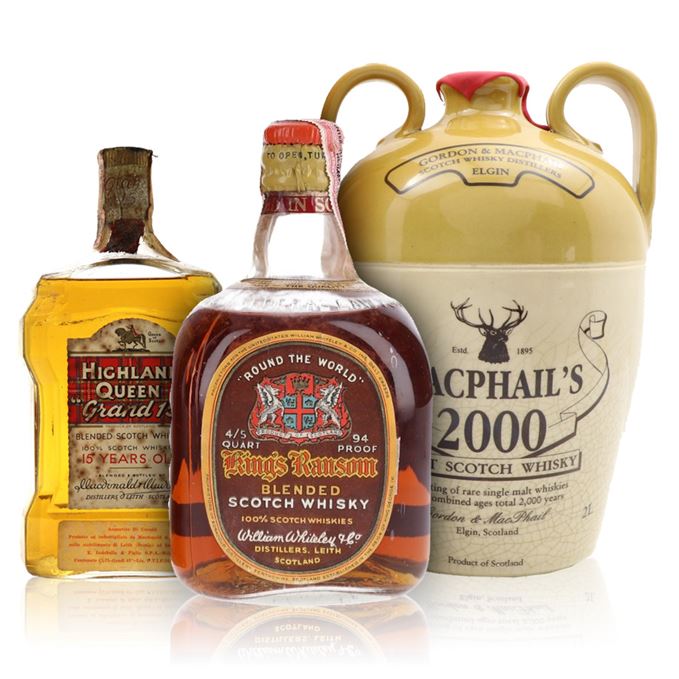 This latest rare whisky tasting sees Angus MacRaild return to the world of blends with a pair of very old and lesser-seen brands alongside a blended malt produced for the millennium by Gordon & MacPhail.

Kicking things off is a bottling of Highland Queen 15 Year Old, produced in the early 1960s by Macdonald & Muir. MacRaild finds it to be an example of the broader brush stroke characteristics of malt whisky from the era as, after all these years, it’s the malt components that sing loudest.

Similarly, an old bottling of King’s Ransom Round the World shows extremely well, MacRaild says. This is due in no small part, he believes, to the higher than usual bottling strength of 47% abv – something which complements the blend’s flavour with texture and body.

To round things off is a blended malt produced by Gordon & MacPhail to mark the millennium. In many ways, as MacRaild says, this is something of a silly release, coming as it does in a two-litre ceramic flagon and containing malts that amount to a total of 2,000 years of age. Knowing the kinds of whiskies G&M had in abundance in the late 1990s, it’s not hard to imagine the old glories that went into this bottling. MacRaild finds it a ‘delicious’ paean to old-school Sherry casks.