One of five lost distilleries in the original Glenlivet.

Aucherachan went alternatively by Achorachan, Achorachan and Acherachan – such was the quality of spelling in the late 18th century – but also Glenlivat (sic). As with so many early licensed distilleries, struggling against illegal distillers and heavy taxation, Auchorachan had mixed fortunes and several owners. However, in its day it played an important role in the history of Glenlivet and the whisky industry. 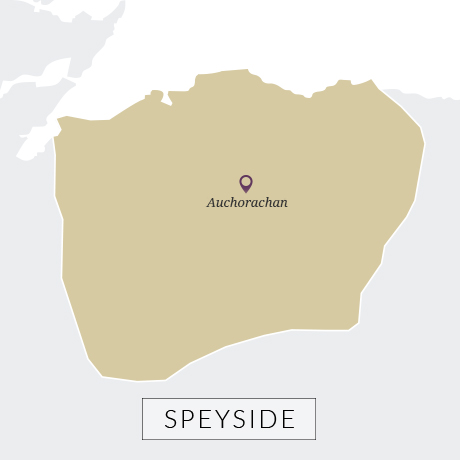 The distillery was originally registered in the 1780s under William Gordon, who died in 1790. It was briefly operational in the following decade but then lay unused for around 40 years until Captain William Grant (not of Glenfiddich fame) re-opened it in 1833. The distillery is noted as ‘operating’ in 1851, but after Captain Grant suffered a serious fall in 1854 the business began to suffer, although some claim his misfortunes were down to the work of some angry fairies.

The date of Auchorachan’s eventual closure is not noted precisely, but the site was later rented by George Smith’s successors (the founder of nearby Glenlivet distillery), the Smith Grants, who raised cattle there and continue to do so to this day.