This is a tale of vindictive fairies, illicit stills and angry smugglers – not to mention the greatest Glenlivet distiller you’ve probably never heard of. Iain Russell tells the story of the ‘Cripple Captain’. 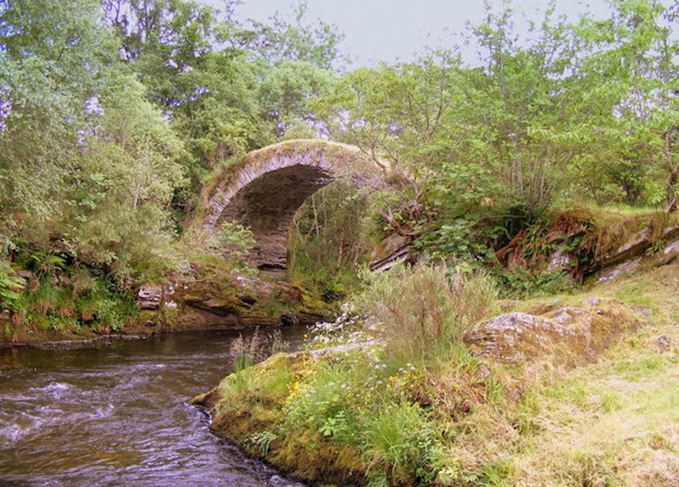 Bridge to the past: the packhorse crossing of the river Livet

The fairies probably did for him. Captain William Grant of Auchorachan (1791-1877) could have been one of Glenlivet’s most famous distillers. But then he offended the little people, and his luck ran out…

Grant was one of three sons of Charles Grant of Tombrekachie, a farm in the remote Highland glen. His parents bought him a lieutenant’s commission in the British Army when he was a lad, and in 1809 his regiment was sent to the Netherlands on the disastrous Walcheren Campaign – over 4,000 men died and 12,000 fell ill to typhus and malaria on the island.

Grant’s worried mother, hearing of the terrible conditions, asked his commanding officer (the future Duke of Gordon) to release him. The young man retired on half pay with the honorary title of Captain, and became a farmer at Auchorachan.

Glenlivet had become a notorious den of illicit whisky distilling at the end of the 18th century. The Excise authorities complained that local lairds connived in the illicit trade, encouraging their sub-tenants to distil whisky in order to earn hard currency with which to pay their rents.

They were dismayed when lairds sitting as Justices of the Peace gave laughably lenient sentences to those convicted of manufacturing or smuggling illicit whisky. The Captain himself was known to be one of the conniving Justices.

After 1823, the local landowner (the Captain’s former commanding officer, the Duke of Gordon) encouraged the establishment of small licensed distilleries in the glen: his leading tenants were ordered to stop encouraging the malefactors.

However, the new distilleries were founded in hard times. One by one, their owners were driven out of business by angry smugglers who saw them as competitors and threatened them with violence – or they were overcome by the sheer scale of the challenges involved in running a distillery business in such a remote part of Scotland.

One of these hard-pressed distillers, James MacPherson of Tomalienen, had to give up in 1826. The Captain stepped in, purchased his stills and utensils, and set up his new ‘Glenlivat Distillery’ at Auchorachan.

The Captain’s was not the first distillery on the site: William Gordon of Bogfoutain was said to have distilled there in the late 18th century, and no doubt the new proprietor was able to recruit men living locally who had continued the tradition.

The Captain and his near neighbour, George Smith at Upper Drumin, survived the difficult early years. They were assisted by the Duke of Gordon’s land agent, who placed substantial orders for their whisky to be sent to the Duke’s great mansion at Fochabers, and to the cellars of many of the Duke’s friends.

Just like Smith, the Captain was also eager to find new markets for his whisky in the south.  He engaged an agent in Edinburgh, Daniel Nicholson, and the latter embarked on an aggressive campaign to advertise Auchorachan’s whisky in Scotland’s capital city.

The following notice appeared in the Edinburgh Evening Courant on Boxing Day, 1835:

‘Glenlivet Whisky. Daniel Nicholson, Broughton Street Edinburgh and High Street Portobello, respectfully requests his customers to try his present stock of pure Glenlivet, eighteen months old, made by Captain Grant in his small still at Aucherican [sic], centre of the glen. It will be found very superior to what is made in the neighbourhood, and sold under the name of Glenlivet.’

About the same time, the local minister wrote in the new Statistical Account of Scotland that the Captain’s Glenlivat Distillery had been:

‘greatly enlarged and gives employment to four men, consumes about 160 bushels of malt made from bear, which yields about 300 gallons of spirit…there is a demand to all quarters of the world, its fame and quality being equal to any smuggled whisky.’

The Captain was so happy with progress in Glenlivet that he tried to replicate his success on his other properties. He opened one on his farm at Glenbarry, on the road from Keith to Banff and then, briefly, another at the pretty coastal village of Pennan, but he was unable to make whisky to equal the character of his Glenlivet whisky.

Wild country: Glenlivet was an often lawless land in the early 19th century

Some said the difference was down to the different water sources, but others hinted that the notoriously ‘canny’ Captain had skimped on the quality of distilling equipment installed at Glenbarry.

By now you’re probably asking: ‘What about the fairies?’ Well, Captain Grant was a military man who liked to get things done, and was not always receptive to cautionary advice. This impetuosity may have proved to be his downfall.

When building a new byre at Auchorachan, the Captain was short of a large piece of masonry to serve as a lintel. He decided to remove a great standing stone from the brow of the hill at Auchorachan, one that had stood there from time immemorial, to serve the purpose.

His farm servants warned him of the dangers of doing so: local legend had it that the stone had been erected by the fairies, and there were many folk tales about the vengeful nature of the little people, and of the evils that had befallen mere mortals when they had interfered in matters relating to the Fairy Kingdom.

The Captain laughed off the superstitions of his servants and had the stone installed in his byre. And then the ill luck began…

The Captain’s cattle began to fall sick and die of a terrible unknown illness, which no-one could identify or cure. In vain did the Captain seek help from cattlemen and veterinarians.

At last, in desperation, he took the advice of his neighbours, who told him that the fairies had cursed his byre and that his cattle would continue to sicken until the stone was returned to its rightful place.

So he agreed to return the standing stone to its original position on the hill. And, sure enough, his cattle began to recover.

This may have suggested that the Captain had assuaged the anger of the fairies, but his subsequent luck suggests otherwise.

In the summer of 1854, the Captain was fined £300, a considerable sum in those days, for serious breaches of the Excise regulations at the Glenlivat Distillery.

That autumn, as he was driving past the garden at Auchorachan in his carriage, with his friend Captain Gordon of the East India Company, the horse bolted.

Both men leapt for safety, but Capt Grant was badly injured in the fall. According to the Banffshire Advertiser, he ‘dislocated the joint at the top of his thigh and fractured a bone there’, suggesting he suffered a compound fracture.

The Captain’s injuries were not treated effectively and proved so severe that he was unable to actively manage his far-flung estates, and his business affairs ‘fell into a jumble’.

He was forced to relinquish the leases, and retired to live with his daughter in Dufftown, where he was given the nickname ‘The Cripple Captain’. He died there in 1877.

The Captain may not have become the most famous distiller in Glenlivet, but he did leave an important legacy. The Glenlivat Distillery’s manager, James Grant, had a son also called James, who learned the arts of distilling as a boy.

In 1895, this other Grant of Auchorachan purchased the Highland Park Distillery on Orkney, and James Grant & Co went on to become one of the great names in the Scotch whisky trade.

Back in Glenlivet, Auchorachan passed eventually into the hands of George Smith’s successors, the Smith Grants, who continued to prosper as farmers and distillers in the glen.

They rented Auchorachan to raise cattle there (a business which continues to this day), but showed no desire to retain the distillery - the buildings were instead converted to barns and byres.

And the Smith Grants left the standing stone where it can still be seen today – they knew better than to offend the vindictive fairies of Glenlivet!