This 19th century distillery stood in the village of Sandbank on the west side of Holy Loch, two to three miles north of Dunoon, between the main (A815) road and the shore. Maps show a small burn flowing into the loch at that point. 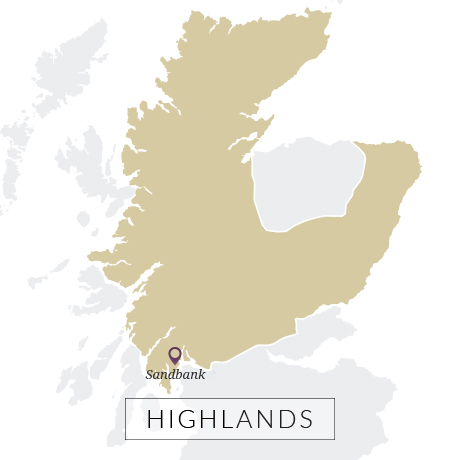 Sandbank distillery was first licensed to Dugald MacKinley in 1825. He only distilled for five years before closing the operation down in 1833.

The site may have been relatively unexciting as a distillery, but the buildings went on to find fame in boating circles.

In 1876 Alexander Robertson founded a boatyard at Sandbank – Robertson’s Yard – that later incorporated the old distillery buildings. Robertson’s became one of the most famous racing yacht builders in Britain, producing more than 500 yachts over nine decades, as well as boats for the Admiralty.

Alexander Robertson died in 1937, and the family sold up in 1965. However, the boatyard at Sandbank is still operated today by Leisure Ecosse.