Search ‘whisky’ and ‘health benefits’ online, and pages of results appear extolling the water of life as a miracle cure for ageing, dementia, weight loss – even cancer. But the roots of whisky’s purported medicinal benefits stretch back to the murky origins of the spirit in post-medieval Scotland. Kirsten Amor investigates. 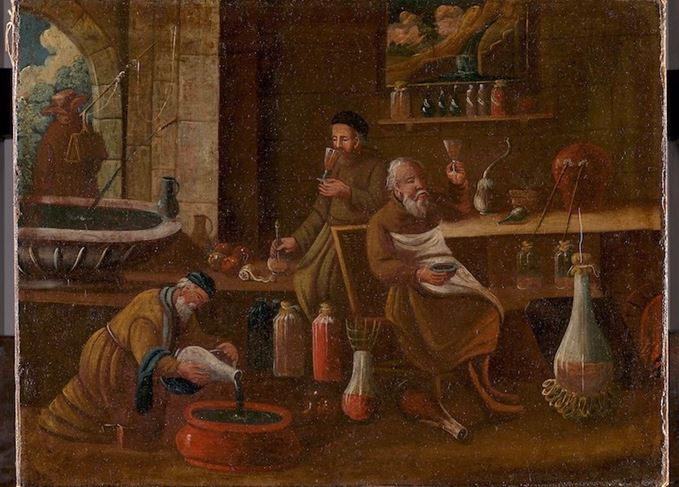 The Middle Ages were a terrible time to fall ill. Lives pained by daily ailments brought on by poor living conditions were usually cut short by minor injuries, such as infected cuts, leading to septicaemia.

Medieval medicine had not advanced further than the theories of the Greek physician Galen, who practised 1,000 years earlier during the time of the Roman Empire. He theorised that people fell ill when their inner ‘Four Humours’ (phlegm, black bile, yellow bile and blood) became unbalanced.

Seen as vital pillars of support to the communities that surrounded them, many monasteries had hospitals, libraries and herb gardens to treat sick patients with their medications, and also to record and disseminate their knowledge.

Monasteries also provided the ideal conditions for the development of early whisky and medicine; they usually had fresh water, regular sources of grain from tithes, and the time and manpower to dedicate to perfecting the craft of distilling.

Knowledge of distillation originated in the study of alchemy by early Persian scientists and medical practitioners, including Jabir ibn Hayyan (AD 721-815) and Rhazes (AD c.854-925). Scholars in 12th- and 13th-century Europe studied with Arabic/Moorish teachers, sharing their Latin translations of Hayyan’s and Rhazes’ works throughout the continent.

Scotland owes its distillation know-how to these globetrotting scholars, in particular the English Arabist Robert of Chester and the Scottish mathematician and pioneering alchemist Michael Scot, who brought texts containing the principles of distillation and made them accessible.

The distillation of grain and fruits led to the discovery of alcohol and, given its roots in alchemy, this was viewed as a potential panacea for human maladies. Throughout Europe, experimentation in distillation ensued, creating various alcohols that grew to be collectively known as aqua vitae, or water of life.

And yet it isn’t until the 15th century that the earliest written record of aqua vitae in Scotland can be found, at Lindores Abbey in Fife. A written reference in the Exchequer Roll of 1494 gives one Lindores Abbey monk, Brother John Cor, the right to distil:

‘To Brother John Cor, 8 bolls of malt, wherewith to make aqua vitae for the King.’

Eight ‘bolls’ of malt was equivalent to 500kg, implying that distillation was already well-established by this period.

Earlier evidence for aqua vitae’s proliferation in Scotland can be found in the country’s royal households. As tradition goes, the MacBeathads (anglicised as Beatons) arrived on Islay in 1300, and served as ‘masters of medicine’ to the island’s monarchs.

They practised alchemical principles rooted in the aforementioned Arabic texts, including distillation, and eventually translated these works into Gaelic. The Beatons served as court physicians to every Scottish king, becoming one of the country’s leading medical dynasties.

As aqua vitae became established in Scotland, laypeople also discovered that its alleviating benefits could serve an alternative purpose: getting drunk.

Hector Boece, a Scottish scholar and the first principal of Aberdeen University, writes in his 1527 text The History and Chronicles of Scotland:

‘When my ancestors were determined of a set purpose to be merie, they used a kind of aqua vite, void of all spice, and onelie consisting of such herbs and roots as they grew in their own gardens…’

Over time, aqua vitae became a popular ingredient in ‘medicinal cocktails’ due to the belief that it had wide-ranging curative properties, and because of its preservative qualities for other medicinal ingredients.

Hannah Bower, a specialist on the relationship between medieval medicine and literature, explains: ‘Aqua vitae was sometimes used to mix ingredients, so it could have served a range of functions in a recipe that, on the face of it, seems very simple.’

The belief in aqua vitae as a panacea is perhaps best highlighted in Warren R Dawson’s compilation of manuscripts, A Leechbook or Collection of Medical Recipes of the Fifteenth Century. Here aqua vitae is listed as a key ingredient for anything from shoulder pain to wounds, and even deafness, as Bower translates:

‘For deafness [....] take the bile of a hare with aqua vite and the milk of a woman’s breast in the same quantity and mix them well together and put them in the ear.

‘For ache of the shoulder joint [...] mix an ointment called marciaton [ointment containing beeswax, olive oil, butter, animal fats, gums and around 50 herbs] together with an ointment known as Agrippa [mastic oil and herbal roots] and a little aqua vita and then apply it to the shoulder. This is proven to work.’

By this period, distillation had spread into the wider community, and evidence indicates that aqua vitae/whisky was consumed on social occasions, although it remained largely reserved for medicinal purposes.

‘Wise women’ or folk healers combined their knowledge of distillation and herbal remedies to provide medicine for patients unable to afford a university-trained physician.

King James IV had a keen interest in aqua vitae and, in keeping with the Renaissance spirit of his day, invested in its development. He was a patron of the eccentric alchemist John Damian, and paid for his laboratories in Stirling and Edinburgh Castles.

Damian sought to create ‘quintessence’, a mysterious element that could turn metal to gold, or grant immortality, and aqua vitae was a key ingredient in his experiments.

But trust in its curative powers for everyday conditions persisted, shown by a recipe for a ‘dangerous cough’ from English poet Gervase Markham in his 1683 farmer’s handbook A Way to Get Wealth:

‘For a dangerous cough:
‘Take Aquavitae and Salt, and mix with it strong old Ale, and then heat it on the fire, and therewith wash the soles of the feet when you go to bed.’

Aqua vitae also appears in recipes for surfeit water, a 17th-century cure for indigestion. This example, from a medicinal recipe book written between 1675 and 1725 by Elizabeth Okeover, is one of several variations:

‘Taking two quarts of the best aqua vitae infused with damask rose water and white sugar. After standing overnight add some red poppy and some raisins.
‘Add to this some musk and some ambergris [a substance produced in the digestive systems of sperm whales] and leave it to stand for 10 days more shaking daily.
‘After this time, it is to be strained through a cloth and bottled. It can be kept until required.’

The unification of Scotland and England in 1707 initiated a tumultuous period for whisky. While the union brought potential new customers to Scotch, it also came with costly levies and licences that spurred the illicit whisky trade.

Farmers depended on illicit Scotch not only as an additional income, but also as an affordable domestic medical treatment for daily afflictions brought on by hard manual labour and poor living conditions: coughs, colds, rashes and even foot pain.

So much so, in fact, that when the Ferintosh estate, the biggest Scotch producer of its age, had its right to distil duty-free whisky withdrawn in 1785, poet Robert Burns wrote:

The Highland Clearances saw many Scots forced to emigrate to the Americas, New Zealand and Australia between 1750 and the 1850s. This great movement helped establish the distillation techniques of whisky in new lands and cultures, along with a belief in its many supposed curative properties, which persists to this day.

After all, how many people still reach for a hot toddy at the first sign of a cold?