Who was the world’s first ‘famous whisky drinker’? Could it be one of Scotland’s greatest monarchs, who mixed a keen interest in warfare, science and sport with an appetite for more ‘worldly’ delights – often accompanied by a flask of aqua vitae? Iain Russell delves into the history books. 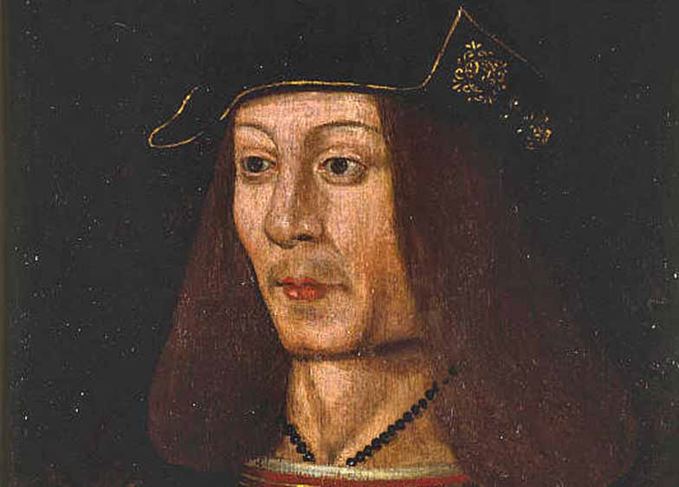 Royal visage: King James IV is said to have been wracked with guilt at his part in the death of his father

An entry in the Exchequer Rolls of Scotland in 1495 recorded that Friar John Cor, believed to have been a member of the Dominican order in the service of the Royal Household, was given charge of eight bolls of malt, ‘wherewith to make aqua vitae’.  This is the first known reference to the manufacture of a spirit from malted cereals in Scotland – to what the Gaels translated as uisge beatha and English speakers know today as Scotch whisky.

In recent times, however, there has been much debate about precisely what the customer for this new-fangled Scotch whisky intended to do with it…

King James IV (1473-1513) was one of Scotland’s greatest monarchs, a true Renaissance prince who loved music and literature, and took a keen interest in scientific research and experiment.

He was an enthusiastic student of the latest developments in warfare and weaponry, as well as a champion of chivalric values. He loved hunting with dogs and falcons and, when the opportunity arose, pursued amorous adventures with a string of mistresses strategically located around his realm.

James is the first king known to have promoted the game of football (he bought four leather footballs for his castle in the 1490s), the first to have played golf (he purchased a set of clubs in 1502), and was the patron of the alchemist John Damian, reputedly the first man to attempt winged flight (although the attempt ended in failure and a broken leg).

And the King’s interest in what we might loosely describe as whisky was prompted by several of these great passions.

James enjoyed campaigning with his army, and participated in the sieges of strongholds belonging to rebel subjects and his English neighbours.

Royal orders: The Borders Kirk of Steill was built at the King’s command (Photo: Jonathan Billinger)

He acquired a formidable collection of cannons with which to batter down their walls, and aqua vitae – whether it be spirit of wine or perhaps a spirit made from local malted barley – was an essential ingredient in the gunpowder used by his bombardiers.

The spirit was used in the corning process, to wet the mixture of saltpetre, charcoal and sulphur which was then rolled and left to dry as a powder.

There are several references in The Accounts of the Lord High Treasurer of Scotland during James’ reign to aqua vitae being acquired specifically for sending ‘to the powder’.

In 1506, for example, the Treasury paid Hans the Royal Gunner for expenses incurred in ‘drying of the gwn powder in the Castell of Edinburgh’, and an additional sum was paid ‘for ane galloun aqua vite to it.’

It seems unlikely that aqua vitae was purchased solely for gunpowder manufacture, however, and a second purpose is undoubtedly connected with the King’s interest in what we now call alchemy.

John Damian was a mysterious character, variously described as French or Italian, who came to James’ court from England in the first years of the 16th century. He set up laboratories, at James’ expense, in Stirling and Edinburgh Castles.

Damian may have developed new medicines and unguents for his patron, but his main objective, it seems, was to discover the alchemist’s holy grail – the fifth element, or ‘quintessence’, which was believed would provide the means to turn base metal into gold and even create the elixir of life. A key ingredient in Damian’s experiments was aqua vitae, and there are several references in the Accounts to spirit being supplied to him ‘for the quinta essencia’.

For R Scot-Moncrieff and other Scottish historians, James’ interest in alcoholic spirits was confined to its applications in the manufacture of gunpowder and alchemic preparations. But there is certainly evidence in the Royal archives that he had discovered the pleasurable effects of drinking whisky as a social tipple.

In his youth, James had been involved in the rebellion which resulted in the death of his father. He took to wearing a chain around his waist and making an annual pilgrimage to a holy shrine in Tain, in penitence for his sin.

However, there were suspicions that the chain was not particularly heavy and it certainly seems that the pilgrimages were less than purely holy – James travelled with his hunting dogs and birds, his court musicians and jesters, and seemed to spend much of his time visiting his mistress and consorting with various ‘maidens’ along the way.

A form of whisky appears to have featured in these Royal jollities, perhaps flavoured with herbs and spices as was the fashion with spirituous liquors of the time.

In 1505, James granted a monopoly of the manufacture of aqua vitae in the burgh of Edinburgh to the Guild of Surgeon Barbers, and the Accounts make several references to spirits being sent from Edinburgh, or supplied by ‘barbours’.

One item in the Accounts that year refers to an expense of five shillings for ‘ane flacat [flask] of aqua vite delivered to the king’. It is followed by an account of nine shillings for ‘that night, at Dernway, for the king to play at cartis’.

Dernway, or Darnaway, was the castle near Inverness at which the King often stopped off on his Royal pilgrimage to Tain – he had granted it to his mistress, Janet Kennedy, so long as she lived there ‘without husband or other man’. This entry suggests that the king liked to have a flask of whisky at the table while he was gambling at cards.

There are other hints in the Accounts to the king acquiring whisky for social drinking sessions. The most notable is a payment in 1507 to the man who brought ‘aqua vite and glasses’ from Edinburgh to Stirling for the King.

The entry is followed immediately by others for money given to the king ‘that nycht’ to play cards with his alchemist, John Damian, and his Falconer.

James came to a sticky end in 1513, leading his army to a catastrophic defeat at the Battle of Flodden – and he never achieved the fame he craved as a great military commander.

Nevertheless, he would have been proud of his achievements in promoting a flowering of Scottish culture, and some dramatic advances in science and education…

…and maybe just a little bewildered to learn that, today, he is chiefly remembered as the world’s first famous whisky drinker!