‘Women are better tasters than men.’ It’s a theory bandied around the drinks industry with such regularity that it has acquired almost QI-type status. Will Alan Davies’ alarm sound? Let’s find out with Lucy Britner. 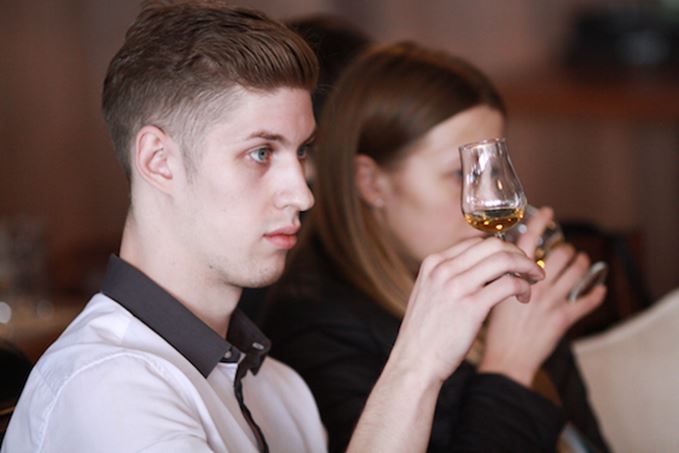 On the whole, though, people who have a penchant for smelling and tasting whisky will be drawn to that world, no matter what gender they are. The meat of the story seems to be in the difference between smell and taste, and why we like what we do – so it’s not just a question of sex.

Dr Alan Hirsch, oenological director at the Smell & Taste Treatment and Research Foundation in Chicago, says the female sense of smell is more acute for evolutionary reasons. ‘It’s not a myth,’ he says. ‘Women are better at smelling than men. It starts during adolescence and persists on getting better.

‘Theoretically it makes a lot of sense because, in evolutionary terms, women are more important to the survival of the species – you need far fewer men to survive. Therefore it makes sense for them to have a better sense of smell.’

Another gross generalisation, perhaps, but Hirsch adds that more women than men have the secondary occupation of food preparation. ‘Smell improves and enhances the more you use it – not like sight for example,’ says Hirsch.

That’s how you acquire a taste, after all. But taste is something different.

‘When it comes to taste, differences are not so evident as smell differences, and taste fluctuation is much more marginal,’ says Hirsch.

Professor Barry Smith, co-director and founder of the Centre for the Study of the Senses at the University of London, further outlines difference between smell and taste. ‘We can taste salt, sweet, sour, umami and metallic tastes,’ he says. ‘Smell comes in to define things as strawberry, lamb, mint, cinnamon, for example.’

Smell also behaves differently, depending on whether it is inhaled through the nose or the mouth. ‘Think of a really smelly cheese – it might smell like a teenager’s training shoe, but it tastes creamy and wonderful,’ says Prof Smith.

‘Women are definitely better at discriminating [between] smells,’ he adds. ‘Statistically they are able to detect more smells. This could be to do with evolutionary reasons – keeping track of offspring and smelling danger, for example.’

But Caroline Martin from Diageo’s whisky specialist team isn’t so convinced. It’s the ability to use descriptors that she feels women are initially better at. Martin has spent 28 years in the drinks industry and she has trained sensory panels and helped develop a common language to describe products. She also studies clinical aromatherapy.

‘My personal take is that everyone is born with the aptitude to pick up and describe different smells,’ Martin says. ‘Women tend to be initially more open with the “flowery language” and come up with more descriptors. But following training, men and women can be as good as each other.’

Martin says certain people are sensitive to certain notes – and it’s important to know who these people are on a tasting panel.

‘Squashed caterpillars’ is one of her more unusual tasting notes and she says this is where culture comes in. ‘I live in the country – life experiences play a large part, because senses are linked to memories,’ she says (though she insists she doesn’t go around squashing caterpillars).

Then there are the individual differences and the fact that some people – men and women – are ‘super-tasters’.

Like Martin, Prof Smith believes culture plays a huge part in our perception of taste. ‘People automatically think something with a viscous, creamy texture is sweet. In fact, cream doesn’t have any sugar in it, but we associate it with sweet things. This often applies to whisky, too.

‘Vanilla is also often described as sweet, [but] that’s culturally specific to the West because we associate vanilla with cake, ice cream and custard. In places like Japan, vanilla is associated with salt because vanilla is more commonly used alongside fish.’

On a practical level, Dr Nick Morgan, head of whisky outreach for Diageo, says women undergo the biggest ‘transformation’ when it comes to taste. ‘Training sessions give people confidence to speak about taste, and flavour and the greatest transformation is in women who realise whisky isn't “difficult”,’ he explains.

That brings us to the question of taste, not in the palate sense but in terms of preference – and we’re back to gross generalisations. Peaty malts have long been lumped into the masculine category, whereas more floral, lighter whiskies are often said to be feminine. After all, girls are made of sugar and spice and all things nice – aren’t they?

Dr Morgan has a different theory: ‘Men and peat – it's like the curry analogy – they very often start with the hottest. Also, if you start with big flavours, they are easier to describe.’

More intriguing is his almost Oedipal analogy: ‘Some peated whiskies have the smell of medicine cabinets. For men, there is nothing more comforting than that smell. It's about being a little boy with a grazed knee and having someone to make you feel safe.’

For Caroline Martin, whisky preference is less about sex and more about navigation through the category. ‘I think it’s too sweeping to say: “Men like big whiskies and women like more delicate styles.” I think both sexes start with lighter styles and progress.

‘Also, the occasion dictates what people want to drink – it’s about making an educated decision, regardless of whether you’re a man or a women.’

So, whether you enjoy fish with vanilla or you’re sensitive to the smell of squashed caterpillars, whisky is not just a matter of taste. It’s a matter of smell too.