Decoding the language of whisky tasting

The art of nosing and tasting is shrouded in mystery. Why is it so hard to pinpoint specific scents? How influential are personal memories when it comes to remembering aromas? Why do some people find it more taxing than others to translate what they smell into words? Dave Broom delves more deeply into this multi-faceted topic. 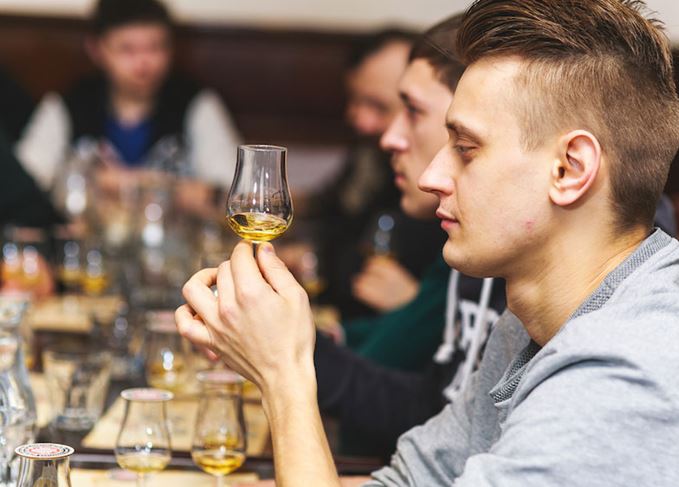 Training the senses: can we be taught how to accurately describe aromas?

For something that is an integral part of human nature, tasting (by which I mean nosing and tasting) is something that remains veiled in mystery. It is still a matter of debate as to how we identify aromas. How we then articulate what we smell is also an area that is not agreed upon.

Even though our senses of smell and taste are hard-wired into our brains, why do we find it difficult to identify an aroma? Is it a matter of confidence, or do we need to undergo some form of training? Can we ever accurately say what an aroma is, or is it too caught up in personal memory, exposure and culture?

The pictures which appear in our minds when we smell something emerge thanks to personal experience. Smell an orange and you will always remember its aroma. Imagine, however, if you have never smelled an orange. How then do you describe its aroma?

When I’m taking an introduction to whisky class, the first question I’ll ask is ‘what do you think  this smells of?’ Someone will say ‘whisky’, and look around to see if anyone (else) is laughing.

‘Great,’ I’ll say. ‘Now, what made you say that instead of it smells of Cognac or gin? There is something in here that makes you think “whisky”. Let’s find out what it is.’ That isn’t always as straightforward as it may initially seem.

Smell is not just personal; it is related to culture and location. I was brought up in Glasgow, so my aroma map is heavily influenced by the smells of that place. As the first encounter with an aroma is also the most intense, the picture of the time, place and object is what is fixed permanently in your mind.

Ardbeg, for example, to me smells like the old Glasgow Subway. How, though, does that help anyone else (other than a Weegie of my vintage) to understand the aroma? To a Japanese whisky lover, the smell is of a specific throat sweet made with coal tar. Who is right? We both are.

Is all of this ultimately reinforcing Wittgenstein’s belief that ‘the limits of my language mean the limits of my world’? The more limited our linguistic base – and aroma map – the less able we will be to identify aromas.

It is an area that has been studied by Asifa Majid, who is professor of language, communication and cultural cognition at the Centre for Language Studies, Radboud University in Nijmegen, and a research fellow at the Max Planck Institute for Psycholinguistics.

She has been undertaking field studies with tribes in southern Thailand, studying the way in which the Jahai and Maniq people speak about aromas by giving them scratch-and-sniff cards and asking them to describe the aroma. The experiment was then repeated later with English speakers. The average time it took the Jahai to identify the smell was two seconds, and all were consistent in their description. It took six times as long for English speakers to respond and the results were less accurate.

The science of scents: Western cultures group aromas into categories, such as ‘spicy’

Of greater significance was the way the Jahai group spoke about aromas. Not only could they identify aromas they had never encountered before, but they were using 12 different terms to describe those aromas, none of which referred to the source of the smell.

Whereas you or I would say ‘this smells like an orange’, the Jahai were using abstract terms to define aroma, placing smells according to their quality. In the West, we group aromas by source; something is ‘fruity’ or ‘spicy’. For the Jahai speakers, the whole sensory experience is articulated rather than it being removed.

The verbs used were specific to the aroma grouping and also referred to whether it was pleasant or unpleasant. They navigate through life by smell: what is an appropriate smell, a good smell, a dangerous one. To them, smell is of equal importance as sight or hearing, and it is an approach shared across a wide range of Austroasiatic languages.

To quote from one of professor Majid’s papers: ‘[This] smell lexicon is not specialist or known to only a limited group of people. Smell talk is not restricted to particular contexts or registers of speech. It is a mundane activity that all members of the community engage in on a daily basis.

‘Smell is an important reference point in a number of areas of life, such as medicinal practices and rituals… The Maniq constantly monitor odours around them and manage smells so that they are surrounded with healthy and safe scents, while avoiding those believed to be hazardous.’

How is this useful? It challenges the long-held assumption in Western science and philosophy that smell is a lesser sense and that humans are not equipped to articulate about smells as accurately as we are to talk about colour. It isn’t that we aren’t hard-wired to identify aromas, rather that we don’t have the linguistic framework.

Majid argues that this could be because in the West we try to make our environments odour-free. We are desensitised. As she said in an interview with New Scientist: ‘[The study] shows us that we have the potential to experience our environment in so many different ways. It makes you rethink your way of being in the world.’

The question is: how can we make this happen?